A trailblazer in the social justice movement, philosophy professor and activist Angela Davis drew public attention to the racial biases of the prison system in the early 1970s. The exhibition and accompanying catalogue Angela Davis: Seize the Time, organized by the Zimmerli Art Museum and traveling to the Oakland Museum of California in October, chronicles Davis’s groundbreaking career through an extraordinary archive assembled by collector Lisbet Tellefsen. Thoughtfully co-curated by Gerry Beegan and Donna Gustafson, a selection of posters, print media, courtroom sketches, artwork, and photographs document the construction of Davis’s public image by mainstream and alternative media. Interspersed with the archival material are works by contemporary artists who continue to build upon Davis’s philosophies of freedom. 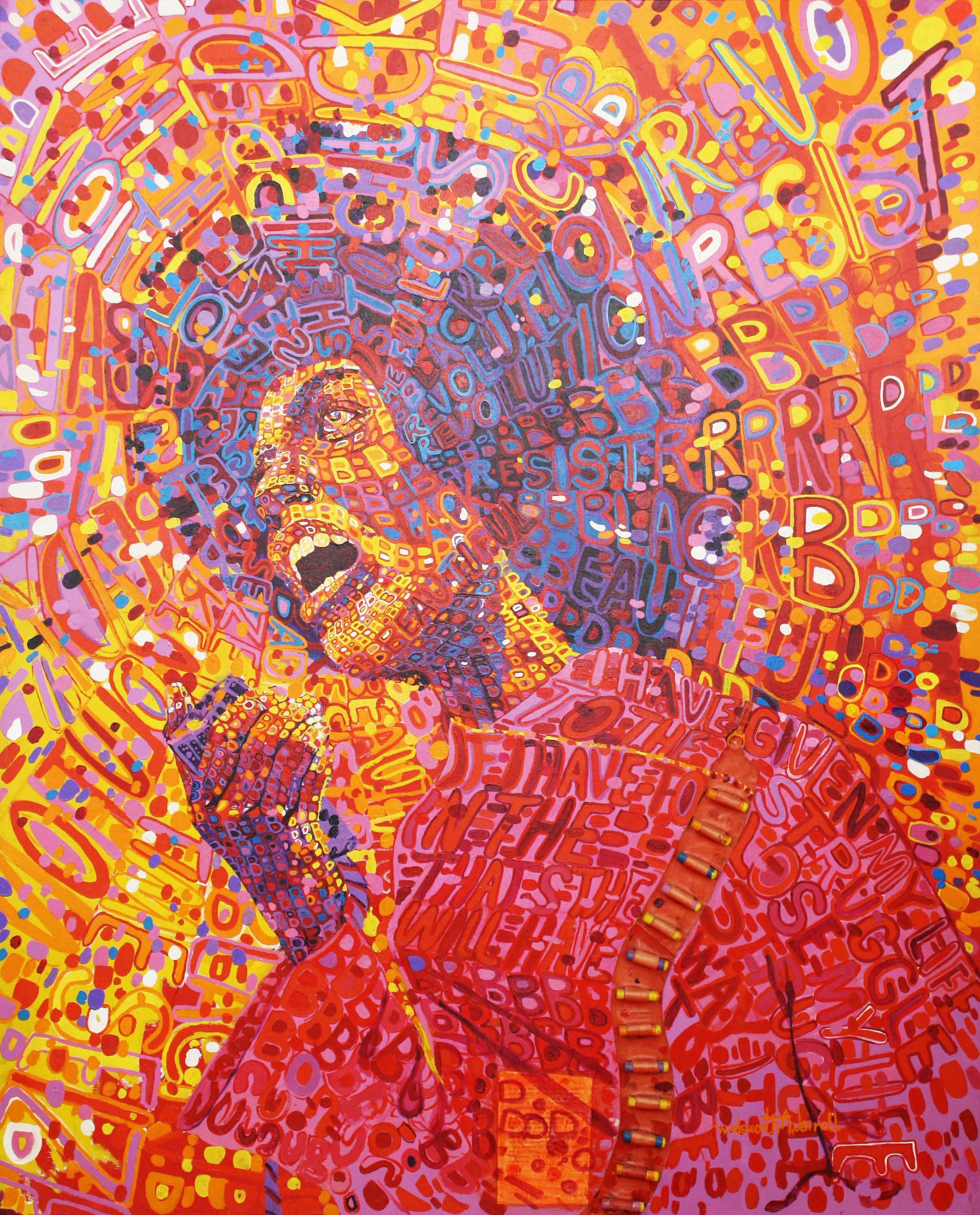 Davis became an international icon when she was accused of involvement in an attempt to liberate the Soledad Brothers (John W. Clutchette, Fleeta Drumgo, and George L. Jackson), three Black prisoners indicted for murdering a white prison guard at California’s Soledad State Prison. During the trial, George L. Jackson’s younger brother, Jonathan Jackson, entered the courtroom, and took the judge and several jurors hostage using guns registered to Davis. The shootout that followed killed four people and resulted in Davis becoming the third woman ever placed on the FBI’s Ten Most Wanted List. After a nationwide search that lasted several months, Davis was arrested on October 13, 1970, and imprisoned, spending several weeks in solitary confinement. A global campaign for her freedom resulted in her release and acquittal.

A member of the Communist Party and the Black Panthers, Davis was already under scrutiny in the local Los Angeles press for her political views in the late 1960s. Among the archival materials from this period is a 1969 article in the UCLA Daily Bruin newspaper reporting on the 2,000 students who attended her lecture on philosophical themes in Black literature in protest of the University of California’s decision to fire her because of her political affiliations. Over the next year, Davis was photographed at rallies connected to the Soledad Brothers Defense Committee, including now legendary images of her at the microphone. Davis’s expressions of solidarity and defiance and her full natural Afro became symbols of empowerment for Black women.

After a warrant was issued for her arrest, Davis’s image was manipulated in the FBI Wanted Poster and in the Life magazine article “The Making of a Fugitive” to portray her as an extremist and a dangerous criminal. In response, artists and leftist grassroots organizations countered this depiction with countless posters, buttons, and artworks that celebrated her right to free speech and called for her freedom. Several highlights, all of which are included in the exhibition, include Elizabeth Catlett’s Angela Libre (1972) a rainbow-colored, screen-printed serial portrait on shimmering silver foil; a screen print of Wadsworth Jarrell’s psychedelic painting Revolutionary, May 20, 1972; and exquisite Aubrey Beardsley-inspired lithographs such as Félix Beltrán’s Libertad para Angela Davis [Free Angela Davis] (1971).

The Angela Davis archive is so rich and extensive that it’s easy to feel a bit overwhelmed. The exhibition requires extended viewing time, and I found it helpful to start by watching two videos: Coco Fusco’s a/k/a Mrs. George Gilbert (2004), in the first gallery, and A Question of Memory: A Conversation with Angela Y. Davis (2019), for which Davis was interviewed by René de Guzman, at the back of the second gallery. The films introduce the exhibition’s intersecting themes such as feminism, freedom, racial representation, the relationship of art and politics, and the relevance of the archive to the present moment. Fusco’s a/k/a Mrs. George Gilbert blends documentary and satire to examine the FBI’s obsession with Davis. The voice of a fictional FBI agent consistently denigrates Davis as a radical, while fetishizing and sexualizing her appearance. Fusco exposes an investigation based on racial profiling, which resulted in the harassment and arrest of Black women across the country based on their natural hairstyles. By the time of her arrest, Davis’s image had become so detached from her person that the police struggled to confirm her identity.

mong the contemporary artists carrying forward Davis’s ideas are Sadie Barnette, Bethany Collins, Krista Franklin, Juan Sánchez, and Carrie Schneider. Barnette, whose father was a member of the Black Panther Party, reclaims his FBI file, which she acquired through the Freedom of Information Act. Copying and enlarging the extensively redacted documents using powdered graphite on paper, she counters the power of the state with pink spray paint and drawings of roses. Collins’s series, “Birmingham News, 1963” (2017), comments on the editorial decision of the paper not to cover the Civil Rights Movement and police violence. Front pages from the spring of 1963 are reprinted onto acrylic plates and blind embossed, creating textured impressions of the text and crinkles and tears that degrade the paper.

Franklin and Sánchez affirm Davis’s place as a prominent historical personage in the collages She Taught us How to Fight I, II (diptych) (2016) and Para Angela [For Angela] (2011). Schneider’s photographs (2012–14) of women reading Angela Davis (An Autobiography) and Davis’s foundational book Women, Race and Class (1981) underscore the continued importance of her scholarship on feminism, prison abolition, and LGBQT rights. The endless repetition of Davis’s image documented in Seize the Time illustrates art’s power as a driver of social and political change. It also visualizes the writing of history by the popular press and encourages viewers to reflect on Davis’s contributions on their own terms.