Sonia Paul, Pop Up Magazine, December 15, 2021
Open a larger version of the following image in a popup:
Share
For nine days after the Afghan government collapsed in mid-August, Fraidoon Khamosh, his wife, Qadria, and their three young children—Omar, Asenat, and Kayenat—shuttled between the Kabul airport during the day and a secret location at night, wondering if they, like the countless other families desperate to leave the country, would ever escape. Two days after they finally left under a Special Immigrant Visa, the Kabul airport was attacked by a suicide bomber.

After processing their paperwork first in Qatar, then Virginia, the family landed in the San Francisco Bay Area. They went to California because Fraidoon’s former colleagues and extended family live there, too. Their friends gave them a place to stay once they arrived and convinced Oakland’s International Rescue Committee to give their case priority, Fraidoon says. The IRC referred the family to a nonprofit, Welcome the Stranger, that supports one refugee family a year. They now live in a house owned by the nonprofit; with subsidized rent, the IRC is paying for their first six months there. “It was like a dream when we saw this house,” Fraidoon says. “We were looking for only a single room.”

As the Khamosh family works with a team of volunteers to adjust to life in the U.S. and the Bay Area—from grocery shopping to enrolling the kids in school to learning English to how to use public transit—the family is also focused on the future, wondering where they can afford to live and what to do for work. Every day feels both busy and slow. As quiet moments sneak in through the overwhelm, Fraidoon says, they’re relieved to be safe. “I cannot forget that we were evacuated by the U.S. military,” Fraidoon says. “But now it’s OK. That’s fine. I’m just thinking about the future.” 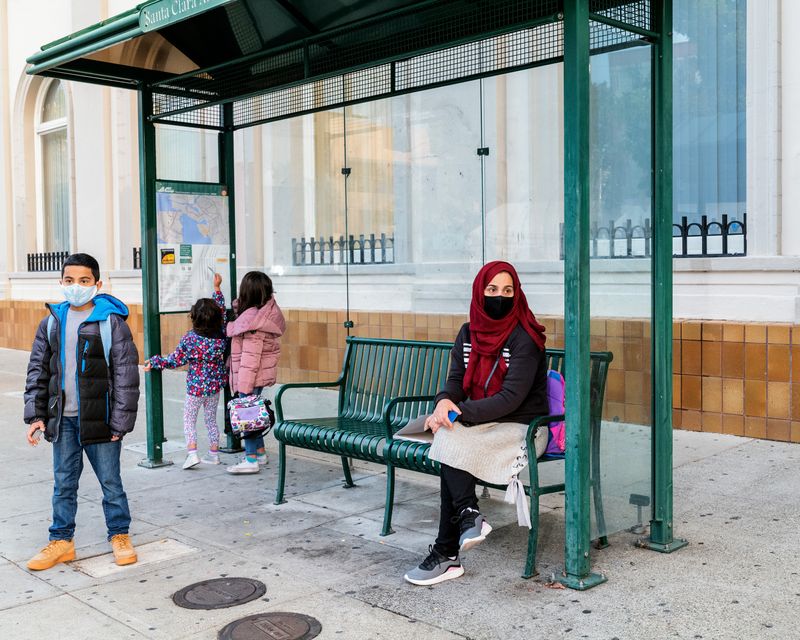 Qadria waits at the bus stop with her children—Omar, 10, Asenat, 7, and Kayenat, 4— early on a Wednesday morning so they can all get to school. After she drops them off, she will take the bus back by herself to go to her English class. 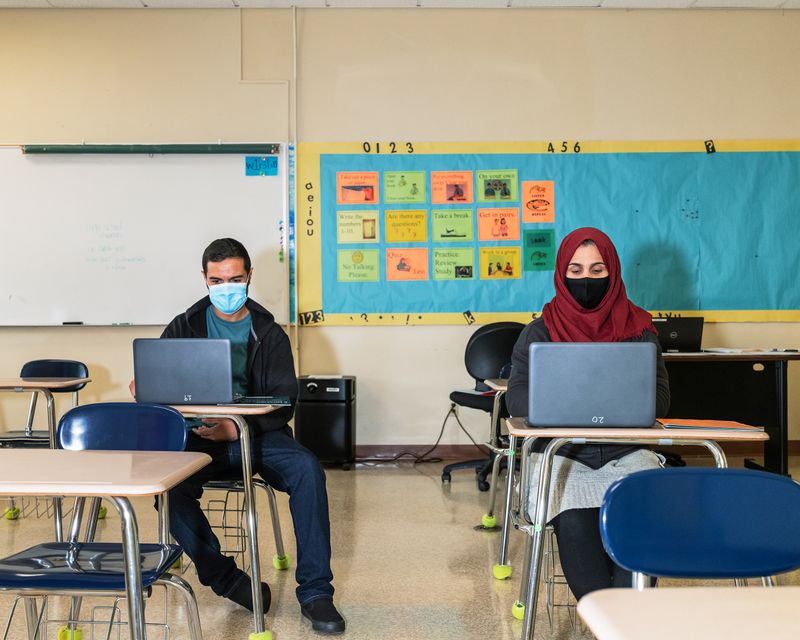 Fraidoon, 35, and Qadria, 25, sit for English as a Second Language placement exams. Qadria is taking both online and in-person beginner English classes so she can learn as fast as possible. 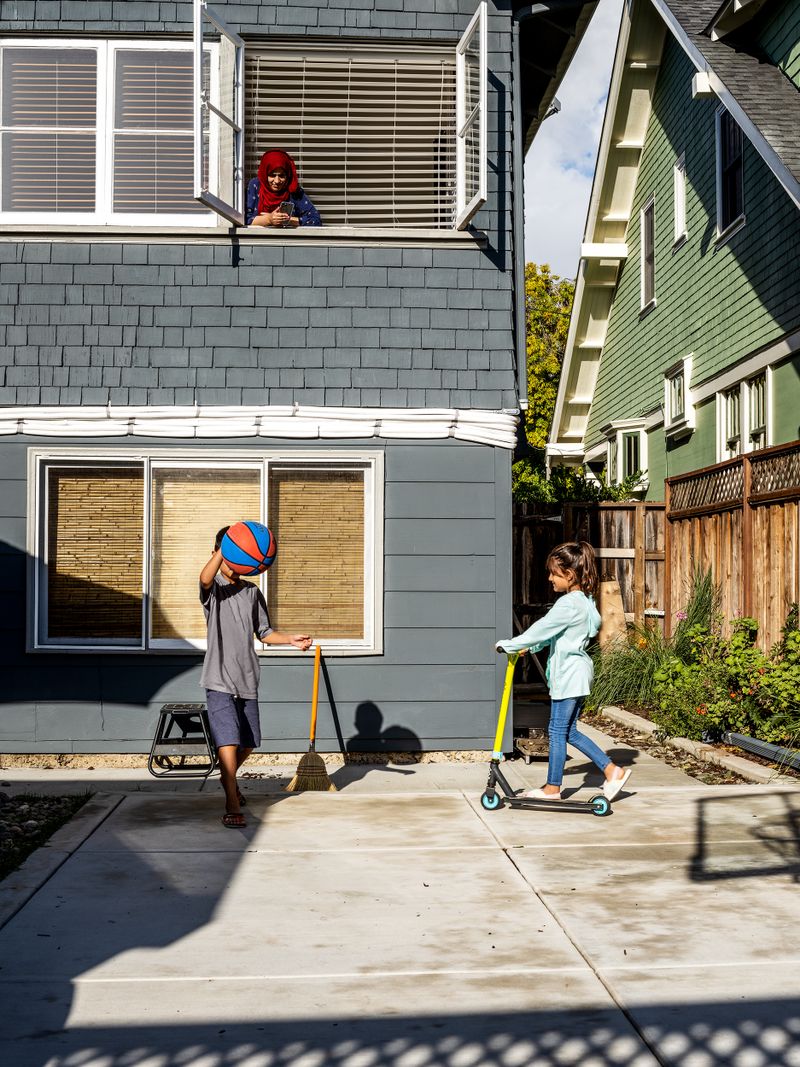 Qadria pokes her head outside the window to watch her children Omar and Kayenat play in the backyard. 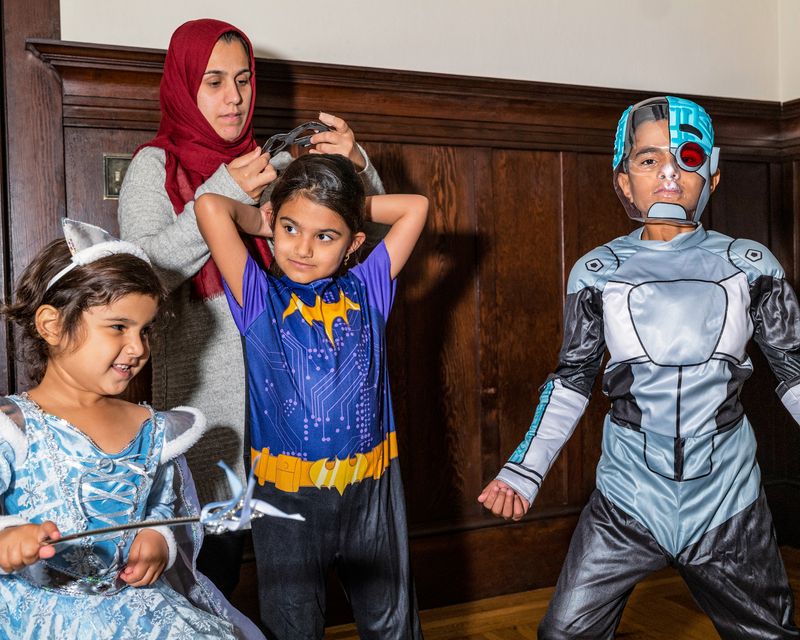 Qadria helps her children dress in their Halloween costumes, which they received as donations. The kids will wear their princess, superhero, and robot costumes to school, but the family opted not to go trick-or-treating this year since they’re still getting used to the neighborhood. 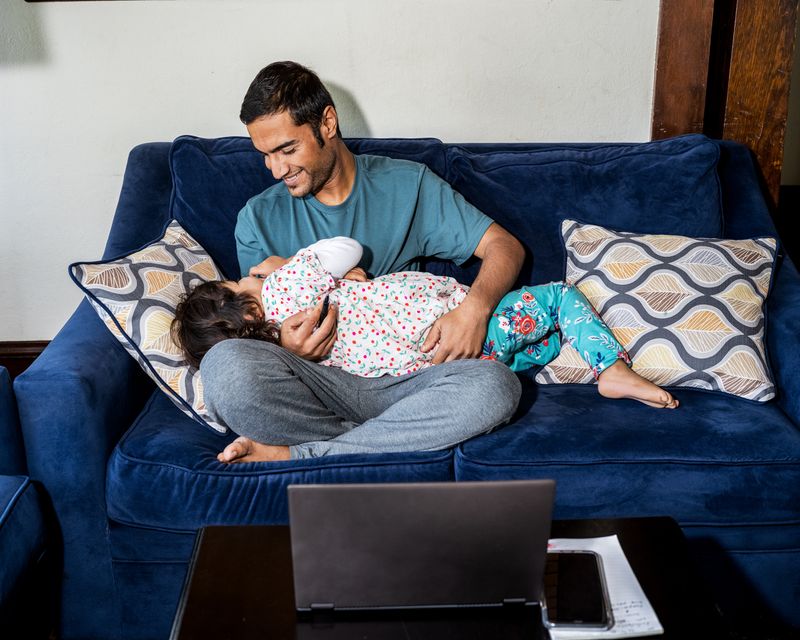 Fraidoon cradles his youngest daughter, Kayenat, after she crawls onto the couch to snuggle up next to him. Playing with his kids helps take Fraidoon’s mind off of different pressures.