Artists Teresa Kutala Firmino and Blessing Ngobeni are a rising South African art-world power duo. Ngobeni, who has earned acclaim for his monumental, politically charged layered canvases, received the Standard Bank Young Artist Award for the Visual Arts in 2020 and shows at galleries including Everard Read in South Africa and Jenkins Johnson in Chicago. Kutala Firmino, part of the art collective Kutala Chopeto as well as a solo artist, will receive her first London show at Everard Read this month. Both significant cultural figures in their hometown of Johannesburg, where they share a studio, this year their impact will be appreciated further afield.

Kutala Firmino’s show at Everard Read is called Manifestation Oku Yongola and is a statement about women reclaiming their bodies, their histories and their power. “Oku Yongola comes from the Umbundu language, an Angolan language: it means wanting,” explains the artist. “For me, to make a statement of wanting – as a woman – is beautiful. It is beautiful for me to say that I want something, not because I need it, not because it is for service, not because I am a mum, or a daughter or a wife, but just me, a human being… women are not supposed to want. You are supposed to wait to be given something.”

Her artworks (from about £5,000) combine paint with collaged images sourced from magazines, newspapers, historical documents, family photographs and social media, to create scenes arranged like miniature stage sets. Many of the figures are masked. The paintings are tense with threat but also have a surreal humour. Everard Read director Georgie Shields, who represents both artists, says: “The couple are original and true voices within the South African art landscape. They are confronting complex and pressing issues through their art.”

Born in 1993 in Pomfret, to a Congolese father and an Angolan mother, Kutala Firmino grew up in a turbulent community of former 32 Battalion soldiers and their families. Many were of Angolan heritage and had settled there after the protracted and bitter South African Border War (1966-1990). The atmosphere was abusive and violent. Although she spoke English, Afrikaans and Portuguese, Kutala Firmino spoke no indigenous language of her own and struggled with her identity: “As a child it was difficult to explain to my South African peers that I am a South African citizen,” she says, her hair bound in sun-yellow braids. “They couldn’t get it, because nothing is written about this [war] in the history books.”

Accepted onto the prestigious art programme at Wits University in 2015, she struggled there at first: “I was a laughing stock because everyone came from the technical school where they’d learnt how to draw portraits and landscapes, and I just couldn’t.” She started finding her métier when the emphasis became conceptual, and she moved into performance art and using oral narratives: “Suddenly you become a storyteller. And so I started telling my family history and then African history, and from then, I became one of the top students.”

The subject that most interested her as an artist, and has continued to drive her creativity, is “what black women in particular felt and saw”. It was Ngobeni, who had met Kutala Firmino during her studies and had already established himself as an artist of note, who urged her to move from performance into painting when she graduated in 2018. On his encouragement, she started using photographs of female family members and recreating their stories in room settings: “I was literally picking up on the experience of the Pomfret women in their homes, and I just fell in love with the form of putting stories in these boxes,” says Kutala Firmino. “And that is how I got into collage.”

“What I find interesting in Teresa’s work is her history – a history that is silenced – and dealing with the experiences of unbelonging,” says architect and curator Paula Nascimento, who co-curated the inaugural and prize-winning Angolan pavilion at the Venice Biennale in 2013. “While issues of mobility and exile have been part of African existence as a whole, seldom have those micro‑histories been addressed in the visual arts.” Kutala Firmino’s work, however, is not simply a form of witness. “Within domestic settings she creates a kind of a mise en scène or film set, allowing us multiple possibilities to enter into a conversation and rethink history.” 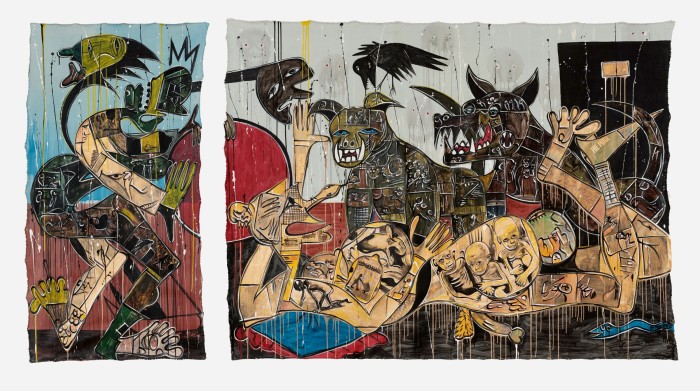 Key to both artists’ mixed-media practices is the idea of telling, in Kutala Firmino’s words, “African narratives from an African perspective, as honestly as possible”.

Ngobeni’s story is also one of coming from the outside. Having left his rural community for Johannesburg at the age of 10, he was imprisoned at 15 for robbery and spent nearly six years in jail. There he became involved in the Tsoga (Wake Up) Arts Project and with the help of wardens and two friends, who brought him art materials, he began to paint portraits of fellow inmates and postcards that they could send home. “It lifted my spirit to believe in a different path of life,” he says. 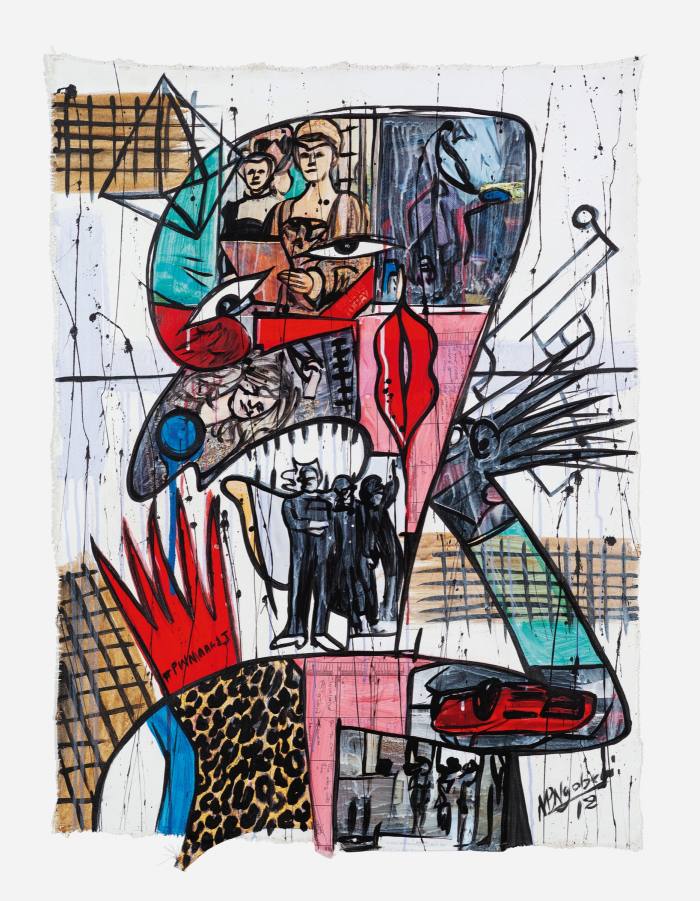 On release, Ngobeni began to make work using materials he found on the streets of Jo’burg. At first he was attracted to the different textures: “Mostly I would use postcards, newsprints and papers of different sizes and thicknesses. They give me a variation of depth,” he says. But, increasingly, the content of the material has fed into his surrealist, Dada-influenced collages, enabling him to build multilayered political statements. His work (£10,000-£40,000) is often critical of South Africa’s present-day, post-apartheid political establishment, but increasingly examines history. His most recent solo show in Cape Town included the three-panel triptych After Berlin Meeting, which refers to the 1884-5 Berlin Conference that effectively legitimated European colonisation of Africa. Another large canvas, Middle Passage, features a monstrous hybrid creature, like a surrealist exquisite corpse, referring to the shipments of slaves across the Atlantic. As well as Jean-Michel Basquiat and Picasso, Blessing cites Gerard Sekoto, the late South African pioneer of social realism, as a key inspiration. “He encouraged me to think beyond what other local, township artists do.”

But while both artists have found art a means to express, explore and exclaim against injustices, they also tap into its potential to heal. Driven to offer opportunities to other young South African artists, the couple are also joint founders of the Blessing Ngobeni Art Prize (alongside Olwethu de Vos), now in its fifth year, which offers a young black artist a three-month residency and a solo show. 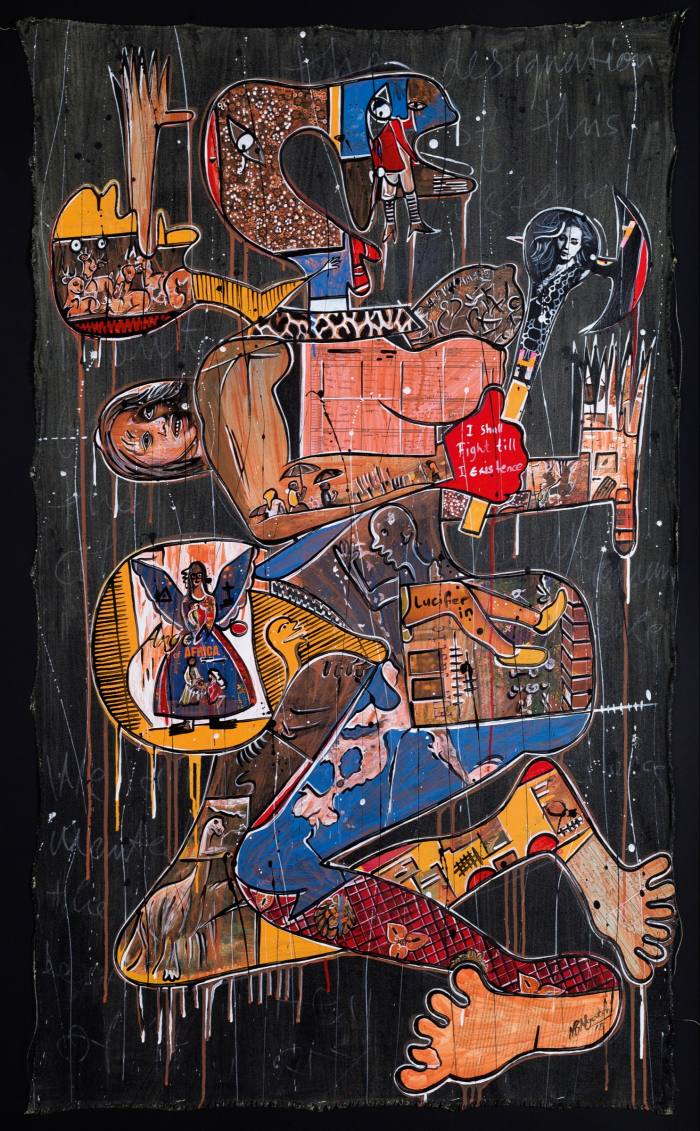 Blessing Ngobeni, The Power of Caring

Says Ngobeni: “There are so many opportunities through education, and other transformations in their lives, which can help rebuild our African continent through the retelling of our history. There are so many black children who so much believe in [colonial, racist] structures instead of believing in what they can create by themselves, right now.”