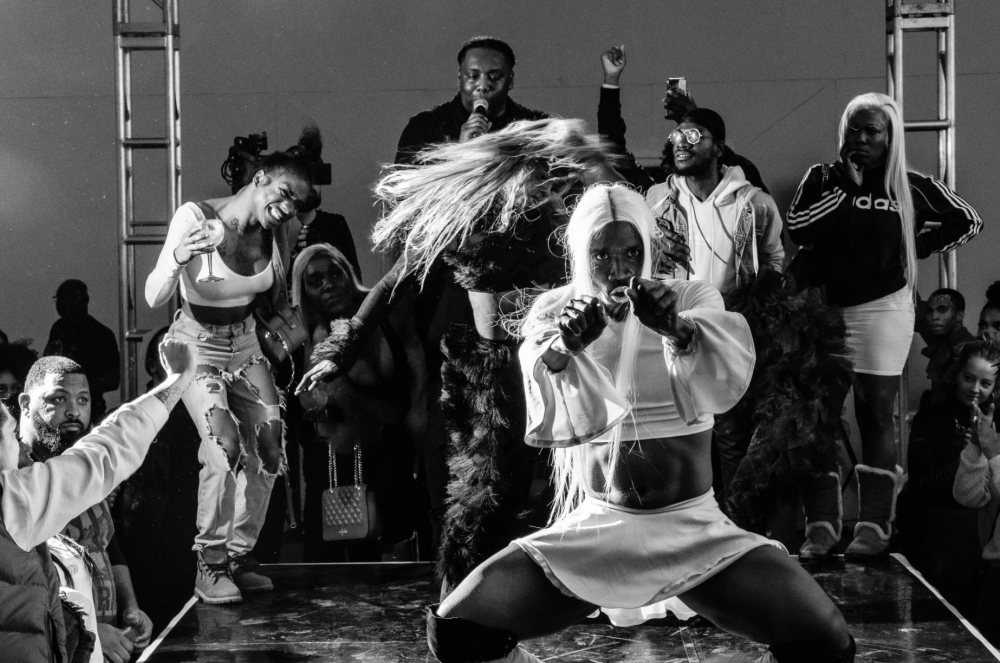 And on a chilly night in November at Philadelphia’s Icebox Project Space, members of the East Coast ballroom community shimmied and sashayed in a room that crackled with possibility.

The Champion Art Ball, along with an exhibition at Philadelphia Photo Arts Center called “To Be Real” and a Vogue Femme dance performance piece, are part of a larger project called “Black Magic” by interdisciplinary artist Rashaad Newsome.

Mr. Newsome, whose work explores blackness and the intersectionality of identity and oppression, was introduced to New York’s underground ballroom scene over 18 years ago through the black queer collective where he lived in a pre-gentrification Dumbo. Like so many young gay, queer, trans and nonbinary people of color before him, Mr. Newsome found a community in the ballroom scene.

The modern ballroom scene originated in Harlem in the 1970s. What began as — and still is — a safe haven for at-risk black and Latino youth has evolved into a sophisticated ecosystem, complete with a global network of houses, a plethora of legendary personalities, a distinct dialect and a massive digital following.

With the popularity of FX’s ballroom-based show “Pose,” Mr. Newsome’s concerns over who controls the narrative of ballroom culture are particularly pertinent, and he wants to give agency to the queer people of color who were integral to its creation.

The scene’s “houses,” led by ballroom legends known as “mothers” and “fathers, act as surrogate families for disenfranchised black and Latino L.G.B.T.Q.I.A. youth; the houses are an integral part of the ballroom community.

“I just want to see people, particularly black and Latino queer people, be in more control of the culture,” Mr. Newsome said. “You have these flaneurs who come and just take. And there’s a legacy of that with every cultural production, and vogue is no exception. I feel like it’s something that kind of happened before around the movie, ‘Paris is Burning.’ And then it was like, ‘O.K., that’s finished.’”

He added: “While in reality it was still growing and evolving.”

The Champion Art Ball consisted of five categories inspired by the work of queer black artists like Mickalene Thomas, Zanele Muholi and Marlon Riggs as a way to counteract the fact that the “houses are all named after very wealthy white European men,” said Mr. Newsome, like the House of Balenciaga.

“What I’m trying to do is eviscerate that frame within ballroom,” he said. “What does it mean for you to walk and look at someone like Mickalene Thomas’s work and reimagine it on the ballroom floor?”

As the competition begins, a vision straight out of a Mickalene Thomas painting, dressed in a patchwork pantsuit, sashayed up the runway, their mile-high Afro bouncing to each beat. Soon after there was a “battle of epic hands,” where participants tell a story using only their upper bodies.

“Sometimes this can take the form of throwing shade to the opponent,” said Mr. Newsome.

There were nine judges, including legends of the ballroom scene and members of various creative communities, like Bill T. Jones, a dancer and choreographer who inspired one of the categories.

The final category was the heartbeat of the ballroom experience: the vogue competition. The contestants must skillfully execute all five elements of Vogue Femme: hands, catwalk, floor performance, spins/dips and duckwalking.

“There’s a lot of moving parts to be mastered: weight balance, keeping up with the rhythm of the music and the commentator, hand coordination and tapping into an instinct because there is no rehearsed choreography in Vogue,” said Omari Oricci, a ballroom legend and vogue instructor. “It is pure expression.”

In the end, the winner of the Champion Art Ball was a dancer named Makayla Lanvin, also known as the Princess of Philadelphia.