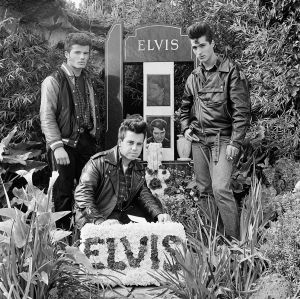 Each year on August 16, a throng of faithful mourners gather in Melbourne cemetery to commemorate the death of their idol: Elvis Presley. They are dressed in leather jackets, some with their hair greased back, most with large bunches of flowers, striking sultry poses in worship of the American star. It was 1985 when photographerPolixeni Papapetrou first encountered this annual ritual and was drawn to document the near-religious-scale cult.

Her series Elvis Immortal, which charts these earnest pilgrims over a 15 year period in black and white square format, is on show at Ararat Regional art gallery, Victoria.

Papapetrou, whose photography explores the relationship between history, contemporary culture and identity, initially befriended the Elvis fans, and was invited in to their homes – some of which were replicas of Graceland – where she documented their dometic shrines, collections of artefacts and impersonation performances.

Elvis Immortal is a fascinating study of fandom and the emergence of the popular cult. Her photographs are respectful to the fans, yet also acknowledge the pathos of their worship.

"Elvis Immortal is not a sentimental journey down 'Memory Lane' but a contemporary exposition of popular culture in its desire for a community of faith, grace and immortality," Ararat Regional Gallery stated.

Papapetrou has been drawn to documenting cult-like cultural enclaves since the early 1980s. From the cult of Elvis, her photographic work has explored the subculture of Marilyn Monroe impersonators, circus performers and body builders.

Elvis Immortal is presented as part of the Virgin Australia Melbourne Fashion Festival's Cultural Program Project Series 2016 and the 2016 Ararat Jailhouse Rock Festival. It is on at Ararat Regional Gallery until March 27.