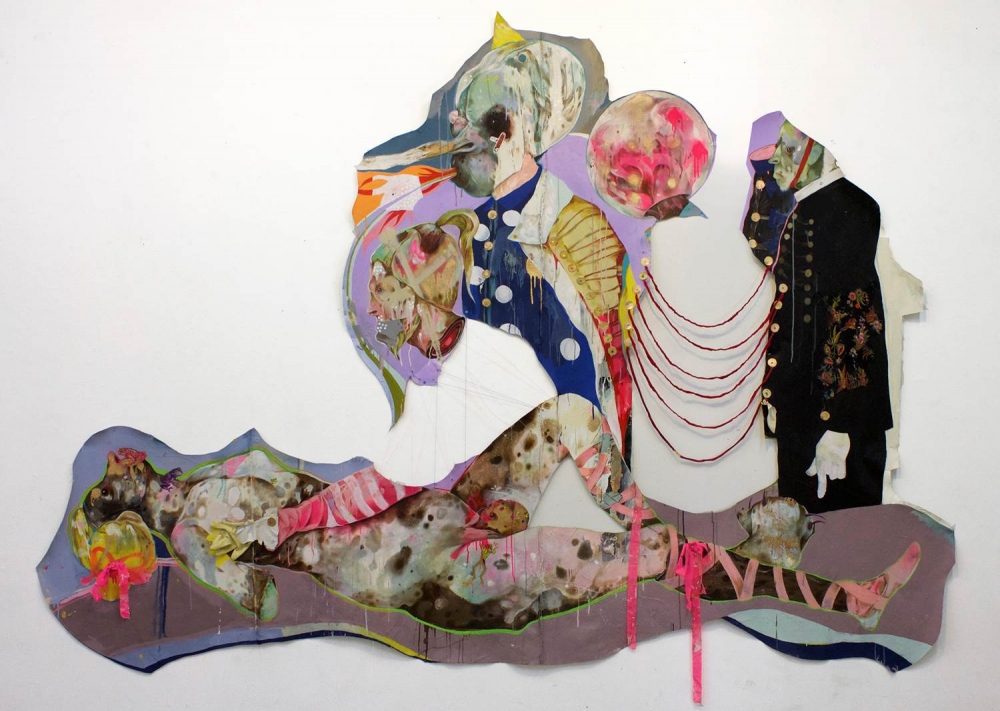 SAVANNAH, Georgia — Contrary to his gentle voice and friendly manner, Lavar Munroe’s first U.S. museum exhibition, Journey Elsewhere: Musings from a Boundless Zoo, is filled with grotesque half-animal, half-human figures wielding hostile gloves and knives like predators. Currently on display at the SCAD Museum and the Gutstein Gallery in Savannah, Georgia, the Washington, DC–based artist’s paintings, sculpture, and installation explore the politics of power, subjugation, and othering. Munroe’s personal version of the contemporary zoo was inspired by his interest as an undergraduate in the “human zoos” that exhibited Native Americans and Africans through the 1950s, as well as his memories of death and violence while growing up in the Bahamas.

Formed from a fusion of cartoon characters, comic book figures, and found materials, “Pinocchio’s Half Sister” (2014), which was commissioned for the 2015 Venice Biennale, features a creature that is neither man nor woman, human nor beast, hunter nor hunted. Poised in no-man’s-land, this peculiar sword-bearing freakish form with an extended arm and victory thumb ridicules the notion of being a spectacle while being one itself. Munroe’s subjects — fitted with a bright yellow decorated glove, patched jeans, scraps of cartoon figures from found fabric, Disney Band-Aids, beads and silk threads used as curtains in the Caribbean, a festive Mickey Mouse hat, and Pinocchio’s large bulbous nose — personify the odd, ostracized other by calling attention to themselves.

The irony of the rejected other is taken to an even starker level in “To Protect and Serve” (2012). Here a large black male amputee with four severed limbs is merged with a ferocious pit bull. Fierce-looking and disturbed, Munroe’s helpless, mythicized “evil black man” becomes the paradoxical antihero. The figure’s existence is given credence and his image is augmented by the artist’s highly tactile anti-aesthetic mode of using cardboard often collected by the homeless, black garbage bags used to wrap forsaken dead bodies in the Bahamas, yellow “caution” tape, rope, spray paint, and cut canvas to form the backdrop and adorn the figure. By consecrating the long-subjugated black man with discarded materials, as he does with his amorphous, taloned figure attacked by wild dogs in “Boy Predator, Boy Prey” (2012), Munroe both amplifies and lampoons the contentiousness of black male identity.

The brightly colored paintings at the Gutstein gallery pay homage to Munroe’s father, who ran a power sailing business and who died of cancer in the Bahamas in 2015. In “Never Again Human: An Empty Bliss Beyond This World” (2016), large macabre figures with oversized reptilian heads, skeletal bodies, and drooping breasts hold blue medical masks and gloves. Alluding to the pariah-like treatment of his father by the doctors and nurses at the hospital, the ominous blue gloves become highly potent symbols of power and medical foul play. Sinister and netherworldly, the ghoulish characters that take shape in a series of notebooks referred to as the “Cabinet of Curiosity” take on the role of the subjugators who humiliate and dispossess the powerless. But Munroe’s technique of cutting away the canvas and literally suspending his cast of characters without legs and a solid base deprives them of the force of their authority. By parodying the medical personnel with party hats and red headbands, Munroe repeatedly overturns the politics of power in these paintings.

Inspired by Joseph Campbell’s book The Hero with a Thousand Faces, in which a man ventures into a supernatural region and returns victorious after combating mysterious forces, Munroe’s heroes in “Days and Nights in the Wilderness” (2015) and “Institution of Captivity” (2015) are subjected to the predator’s world. Though not as strong as some of the earlier works where the mash-up of found materials and nebulous shapes convey a strong sense of brutality, these signature cut canvases and strings attaching various pieces still point to swaths of life that are literally severed from the underdog in a bigoted world.

Munroe’s sculptures “Bushman #1,” “Bushman #2,” and “Tale of Twin Gods” convey the raw energy of a superhero. Festooned with colorful beads and fabric, these gods with bulging eyes, animal heads, and limbs constructed from cardboard and found wood come alive in the gallery. Their posture and mien seem to combat the terror of violence and abasement in the contemporary human zoo, providing hope to the onlookers. From looking at the large parachute hung in memory of his father, it seems that Munroe’s heroes will eventually fly high, untethered by the restrictions of society, ultimately journeying elsewhere through a free and boundless world.