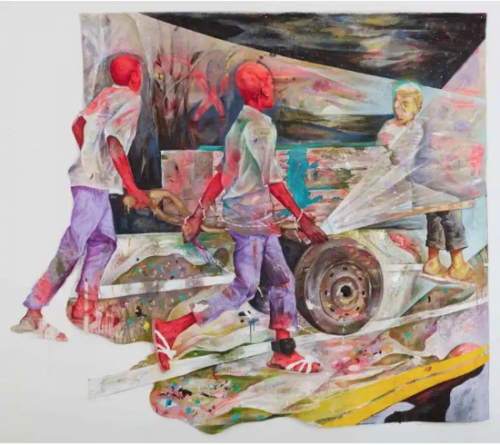 OCTOBER IN THE UK is black history month. It’s also a significant month when it comes to art this year. Throughout the month, and the rest of the fall season, there are many opportunities to experience the work of emerging and established figures. Black artists are headlining exhibitions at museums and galleries in London, and elsewhere in the UK. The selection includes British, American, African, and Caribbean artists.

Many of the presentations are firsts for artists, from Lina Iris Viktor whose exhibition at London’s Autograph is her first major solo show in the UK to Kudzanai-Violet Hwami who has her first solo institutional exhibition at Gasworks in London.

Much further afield, Otobong Nkanga is presenting her first UK museum show at Tate St. Ives. Two hours outside London, the 2019 Turner Prize exhibition is at Turner Contemporary where each of the four shortlisted artists, including Oscar Murillo and Helen Cammock, are staging solo shows. This season’s shows include the following 24 exhibitions:

Lavar Munroe is presenting new paintings and sculptures based on fictional characters he calls The Redbones. A generation of children from poor communities, the group is selected by society’s wealthy class to serve on the frontlines of “the fight for freedom and justice for all.” In describing his latest body of work, Munroe states that it explores “various notions and understandings surrounding rites of passage, institutional credence and service-based insurgencies. It points to child soldiers, juvenile detention units, prisons, fraternities and school yards among many other organized social groupings.” Born in Nassau, Bahamas, Munro splits his time between Germantown, Md., and Nassau.