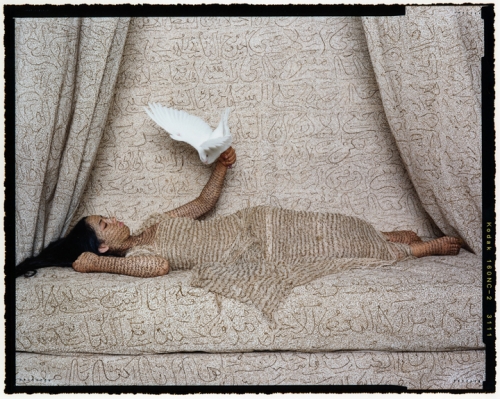 Moroccan-born, New York-based photographer Lalla Essaydi (b. 1956) explores issues surrounding the role of women in Arab culture and their representation in the western European artistic tradition. Her large-scale photographs are based on nineteenth-century Orientalist paintings, but work to subvert those stereotyped and sexualized representations. Aside from their timely and provocative subject matter, Essaydi’s photographs are technically impressive. Behind each of her images is weeks of preparation, as the text is composed, the fabrics are dyed to match the setting in which they will appear, and the architectural backdrops are carefully constructed. The entire field of the almost life-size photographs appears in sharp focus, the result of her use of a large-format camera and traditional film.

Lalla Essaydi: Photographs includes ten works from three different series—Les Femmes du Maroc, Harem, and Bullets Revisited—presented in spaces throughout the museum. One group will be shown in the gallery dedicated to contemporary art, while others will be shown in the context of the Museum's Permanent Collection: alongside examples of historic Middle Eastern tilework and calligraphy; with related European paintings; and as part of the discourse of Modern art.