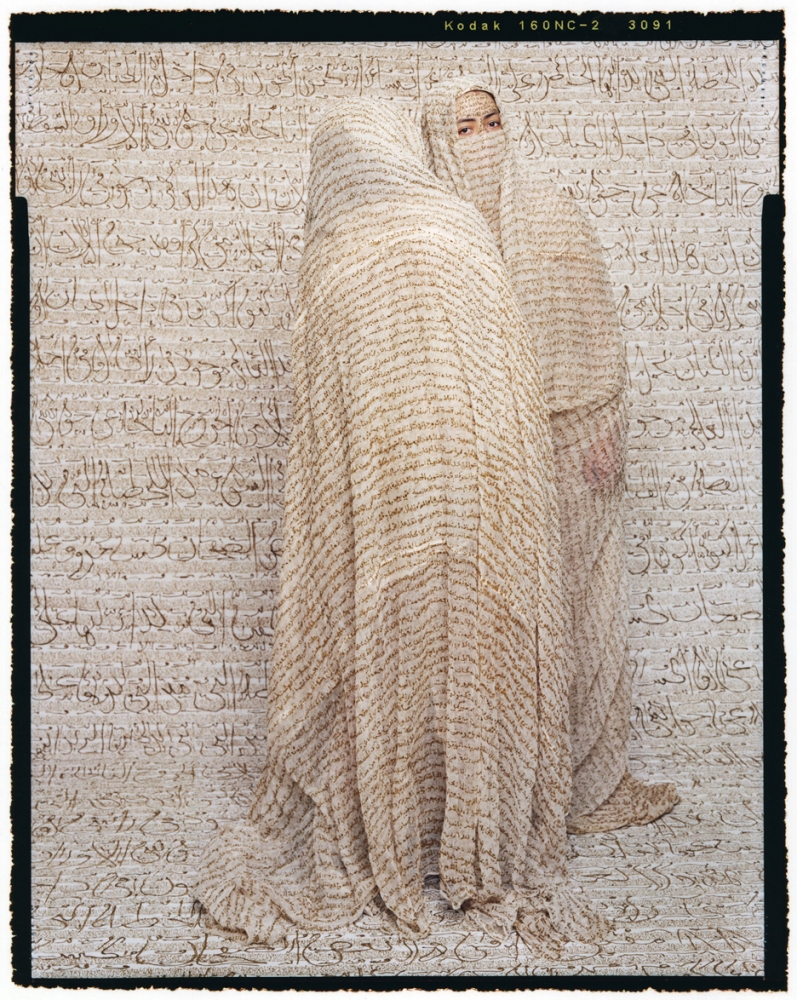 A major new exhibition at the Cantor Arts Center, She Who Tells a Story, presents the pioneering work of 12 leading women photographers from Iran and the Arab world. The artists explore identity, narrative, representation, and war in daily life, inviting a broader understanding of the Middle East than what Westerners glean through media reports. The 79 photographs and two videos—a collection of stories about contemporary life—especially refute the belief that women from this region are oppressed and powerless. The exhibition was organized by the Museum of Fine Arts, Boston (MFA) and runs at the Cantor, its only West-Coast venue, January 28 through May 4.

Amidst the myriad approaches to photography and varied experiences of the artists, the exhibition highlights three themes: Deconstructing Orientalism, Constructing Identities, and New Documentary. While most of the work was made between 2008 and 2012, the exhibition includes two important series from the 1990s that marked a turning point in the recent history of representation and inspired exploration by other photographers. Shirin Neshat’s portrait Untitled (1996), overlaid with Persian script from a contemporary Iranian woman writer, evokes the role that women played in the Iranian Revolution. Iranian artist Shadi Ghadirian took pictures that illustrated issues of identity and being female in Iran. Ghadirian’s eight prints from her iconic series Qajar (1998) juxtapose young women in traditional dress with then-forbidden objects—boom boxes, musical instruments and makeup—suggesting tension between tradition and modernity, restriction and freedom, public and private. Ghadirian’s later series Nil, Nil (2008), meanwhile, visually investigates the home during war through subtle intrusions. The series includes images of bullets protruding from a handbag, a grenade in a bowl of fruit, and a military helmet hanging on the wall next to a headscarf.

Moroccan-born Lalla Essaydi, a former painter, uses iconography from 19th-century Orientalist paintings as inspiration to explore her own cultural identity. In the triptychBullets Revisited #3 (2012), the most expansive work in the exhibition at 5 1/2 x 12 1/2 feet, Essaydi uses calligraphy (a typically male art form) to suggest the complexity of gender roles within Islamic culture. In the triptych, silver and gold bullet casings evoke symbolic violence, referencing her fear about the growing restrictions on women in a new post-revolutionary era that followed demonstrations and protests in the Arab world that began in 2010.

Photojournalist Newsha Tavakolian turned to fine art photography after experiencing difficulty photographing in public in 2009. Tavakolian’s six portraits, six imaginary CD covers and a silent six-screen video from her series Listen (2010) portray professional singers who, as women, are forbidden by Islamic tenets to perform in public or to record CDs.

Each artist approaches the medium of photography differently, resulting in a range of image scale, style, and subject. Artists like Tavajolian are fluent in journalistic as well as fine art techniques, and their work—like that of Gohar Dashti— represents an intersection of documentation, narrative and expression. In this new documentary approach addressing social and political issues, artistic imagination imbues real-life situations and experiences. In Dashti’s Today’s Life and War (2008), a series of narrative, staged photographs, a man and woman pursue domestic activities—laundry, watching TV—in a fictionalized battlefield. In Untitled #5, they sit as newlyweds in the shell of an abandoned car; in Untitled #7, they eat on the ground at a makeshift traditional table celebrating the Persian New Year, Nowruz. The remaining five prints show the couple performing daily routines but interrupted by symbols of war—a tank, missile head and a wall of sandbags.

Contrasting Dashti’s staged documentaries are works by Egyptian Rana El Nemr and Jordanian Tanya Habjouqa that directly capture people in urban settings. In her series Metro(2003), El Nemr has inconspicuously photographed passengers in the transit car designated for women. In Women of Gaza(2009), Habjouqa recorded the experience of women in Gaza, who, like all residents of the occupied territory, live with limited freedom. Taken over a span of two months, the images celebrate modest pleasures, including a picnic on the beach, a rest on a bench between college classes and an aerobics class.

Rula Halawani, born in East Jerusalem, photographed scenes of war—tanks in action, grieving mothers and families in the rubble of the aftermath—and then used a technique that obscures the specifics of time and place, thereby increasing the dramatic intensity. Nermine Hammam’s series Cairo Year One (2011–12) depicts the January 2011 uprising in Egypt and its aftermath. Hammam imbedded photographs of soldiers in Tahrir Square within peaceful landscape scenes from her personal postcard collection. She also created two prints after the uprising was over—when it was difficult for her to photograph—by combining reproductions of 17th and 18th Japanese screens with photos of police brutality.