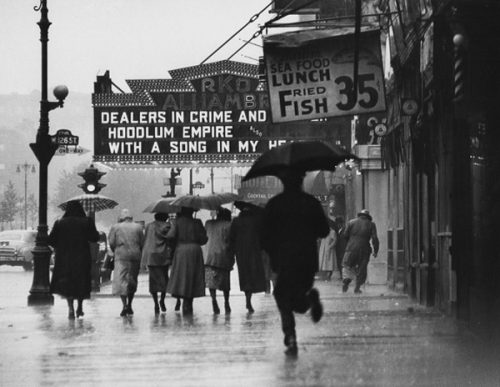 Masters of their fields, the photographerGordon Parks and the writer Ralph Ellison bonded over a shared vision of using their creative talents to address racial injustice. That commitment led to the powerful, enduring 1952 photo essay“A Man Becomes Invisible.”

But that Life magazine project was not their only collaboration. A new exhibition, “Invisible Man: Gordon Parks and Ralph Ellison in Harlem,” for the first time shows images from a lesser-known 1948 project of theirs, “Harlem Is Nowhere.” On view through Aug. 28 at the Art Institute of Chicago, the exhibition offers the two men’s counternarrative (the reality, that is) of the living conditions of black Americans during that time. Among the show’s more than 50 objects — the known surviving material belonging to both “A Man Becomes Invisible” and “Harlem Is Nowhere” — are newly discovered images, photographs that have never been exhibited and items that had not been definitely identified as belonging to either project.

The black-and-white photographs are vignettes of life in Harlem: street scenes of adults and children; political advocacy in real time; and imagined scenes from “Invisible Man,” Ellison’s watershed 1952 novel. The photographs are placed next to the passages that correspond with them, giving a sense of the tight collaborative process. Among the other highlights are drafts of captions for “Harlem Is Nowhere,” and images include a man in an alleyway; Harlem in literal ruin with a clinic building acting as a bright light; and a patient waiting to be seen, sitting in solitude, head in his hands.

Ellison and Parks “lived parallel lives, and they intersect in a creative splendor,” Adam Bradley, an associate professor at the University of Colorado, Boulder, who has written about Ellison’s work, said in a telephone interview. “They both understood the capacity of dark and light, light and shadow, black and white.”

These artists were compelled to focus on Harlem, their adopted home, which despite being the center of a cultural revival during the Harlem Renaissance, suffered a great economic toll tied to the Depression. They also witnessed the mounting postwar frustrations among their neighbors, black men who had been enlisted to fight but whose freedoms remained limited upon their return home.

“Harlem Is Nowhere” gets at these disparities and shows the economic effects of segregation at the Lafargue Mental Hygiene Clinic in Harlem, the first racially integrated psychiatric center of both staff and clientele in New York City. It was also the site of an earlier photo and text collaboration, between Richard Wright and Richard Saunders, and studies there played a role in Brown v. Board of Education.

“Ellison really viewed the clinic as a prism for understanding African-American experiences, primarily with migration and urbanization and the precariousness of life in a ghetto,” Gabriel N. Mendes, an assistant professor at the University of California, San Diego, who wrote a book about the clinic, “Under the Strain of Color,” said in a phone interview. “He was able to capture what African-American patients were reckoning with in regards to different forms of mental disorders. But he also used Lafargue as an elaboration of what African-American life was in a profoundly contradictory system.”

Ellison’s notes reveal that he intended the project to address “the disparities in north and south Harlem, the disintegration of slum life and success of the clinic” among other things. In correspondence with Wright, Ellison said he hoped the project would “make for something new in photo-journalism.”

Scheduled to appear in ’48: The Magazine of the Year, “Harlem Is Nowhere” ended up lost when the magazine folded mere weeks before the article’s publication. After the magazine filed for bankruptcy, the project became entangled in court proceedings. Years after recovering his written text, Ellison published it in “Shadow and Act,” a 1964 collection of essays, but none of Parks’s photos appeared with it.

The first step in the process of identifying works for both projects was “the realization that there were dozens of images that were not included in the 1952 Life story and were subsequently never published,” Michal Raz-Russo, an assistant curator at the Art Institute of Chicago, said, referring to Mr. Parks’s photo essay “A Man Becomes Invisible.” “There were images that corresponded to nearly every major scene in the book that took place in Harlem.”

Ms. Raz-Russo then initiated an effort in 2014 to identify the works. She called it part scavenger hunt and part research: There were clues, including information about the overlapping Harlem projects, drafts of photo captions and more, but no way to verify which projects the photos belonged to. When Jean-Christophe Cloutier, an assistant professor of English at the University of Pennsylvania, found two manuscripts related to “Harlem Is Nowhere,” both Ms. Raz-Russo and Mr. Cloutier were able to complete the puzzle and identify the images. As luck and hard work through research would have it, the Library of Congress had what was known to be the only surviving photograph taken by Parks from inside the clinic.

Ellison and Parks were not alone in their efforts to push the boundaries of mainstream news media and expose racial disparities in the United States. Other prominent artists from various genres who collaborated in the mid-1900s included Richard Wright and Edwin Rosskam, whose 1941 book, “12 Million Black Voices,” depicted the lives of black citizens in the 1930s, and James Baldwin and Richard Avedon, who produced a photography book, “Nothing Personal,” with text condemning the bleakness of life in 1960s America.

Parks and Ellison’s “A Man Becomes Invisible” was conceived as a response to the publication of Ellison’s novel, about a man who lives in a hidden world because of his invisibility to others. Beyond the professional work, the show also offers glimpses of their personal connection.

“There was a solitary quality about each of them,” said John Callahan, Ralph Ellison’s literary executor. “As Ralph would talk about it, he would say, ‘I could just walk with Gordon, and he wouldn’t expect me to say anything and I wouldn’t expect him to say anything.’ I have a sense that there was an electricity and a casualness to their relationship.”

Mr. Bradley elaborated. “In some ways, their collaboration is akin to a great songwriting duo,” he said. “One handles the music, the other lyrics, and there’s never something that comes completely first. They understood that the sum of their art would be greater than its individual parts.”

An article on Thursday about collaborations between the photographer Gordon Parks and the writer Ralph Ellison, including the project “Harlem Is Nowhere,” misstated a comment by Ellison in a letter to the author Richard Wright. He wrote that he hoped that the Harlem project would “make for something new in photo-journalism,” not that it would be a “new departure in photo reporting.” (That comment was made in a letter to Ellison from Richard E. Lauterbach, editor of the magazine in which the project was originally scheduled to appear.)