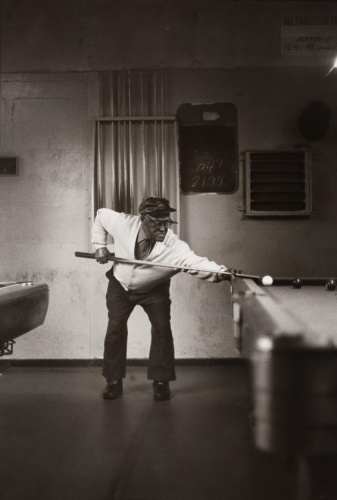 Being the first black woman photographer to have a work acquired by the Museum of Modern Art in 1975 “was like getting an Academy Award and no one knowing about it”, Ming Smith tells me over the phone from her home in Harlem, New York.

Her accent has an East Coast sharpness, although the artist was born in Detroit in the 1950s and grew up in Columbus, Ohio. She studied medicine at Howard University in Washington, DC, but switched to microbiology because she was too squeamish to dissect frogs. Her early career as a fashion model and her marriage to the jazz musician David Murray meant she was frequently on the road; much of her work has focused on jazz performers.

“Being a black woman photographer was like being nobody,” Smith continues. “It was just my camera and me. I worked to capture black culture, the richness, the love. That was my incentive. It wasn’t like I was going to make money from it, or fame — not even love, because there were no shows.”

Today, Smith is feeling the love. She has a solo presentation at Frieze Masters of vintage black-and-white prints from two bodies of work: her “Invisible Man” and “August Wilson” series, the latter named after the Pulitzer Prize-winning playwright. It is her first solo show in London (in 2017 she collaborated with the African-American video artist Arthur Jafa on his exhibition at the Serpentine Gallery).

In the early 1990s, having obtained the phone number of August Wilson’s sister from a friend, Smith boarded a Greyhound coach to the Hill District of Pittsburgh, Pennsylvania, where the writer grew up and based most of his dramas. Retracing Wilson’s steps, she photographed the people and places that could have featured in his plays.

In one skilfully composed picture, a squat pool player in a button-down cardigan and leather cap leans in to take his shot, while the edges of the frame fuzz out of focus.

In another penetrating portrait, a woman Smith imagines as Wilson’s mythical character, Aunt Ester, returns the viewer’s gaze from beneath the floppy rim of her knitted hat, the light sharply reflecting from a silver butterfly brooch pinned to her coat.

“Wilson made marginal people monumental,” Smith says. “Just from going to his plays, I felt so strongly about those characters. When I grew up in Ohio, these were characters I knew.”

The photographs in her “Invisible Man” series (1988-91), which borrows its title from Ralph Ellison’s 1952 novel, are more ethereal. In these works, black figures are captured on camera, but their faces are turned away or hidden in shadows; they are caught in the gloaming, between visibility and invisibility.

The images are potent signifiers of the struggle faced by African-American men and women to not be expunged from history, of which Smith has deep-rooted experience. Despite her early MoMA milestone, for the next 40 years her work received little attention from the established art world. “It wasn’t like I was not there, no one asked me,” she points out.

At the time her work was acquired by MoMA (an offer Smith initially refused because the money didn’t cover her expenses), there were few places for African Americans to exhibit their work. There was the Studio Museum in Harlem and Just Above Midtown, a pioneering gallery on 57th Street, which was run by Linda Goode Bryant between 1974 and 1986.

“Artists such as Ming Smith and David Hammons were creating a history unto themselves, which was not necessarily enfolded into a more general history of New York, or even the US, at the end of the 20th century,” says Laura Hoptman, the executive director of the Drawing Center in New York and curator of the Spotlight section at Frieze Masters.

“It’s only over the past five to 10 years that there’s been a reassessment in the US and Europe of how we look at history. And that there are many, many different histories.” MoMA’s 2010 show, Pictures by Women: A History of Modern Photography, was a turning point, particularly for Smith.

Away from the largely white-run art spaces of 1970s New York, Smith had her very first exhibition, in around 1973, at Cinandre, a hairdressing salon on 57th Street and Madison Avenue. “It was a very progressive place,” she remembers. “You had black and white, straight and gay. It was artistic and there wasn’t any judgment.”

Smith recalls her show being on one of the coldest days of the year, in January. And yet, “there was a line, believe it or not, to come in. Even Romare Bearden and Roy DeCarava came.”

It was at Cinandre that Smith also met Grace Jones, who would have her signature flattop styled there. “Grace Jones was not a thinker at the time,” Smith observes. “We had known her as a singer, she was an aspiring model like me. And we became friends there.” On one occasion Smith shot Jones wearing a black-and-white tutu.

Around the same time, Smith was invited by Anthony Barboza and Lou Draper to join the photography collective Kamoinge. She was the first woman to become part of the group, but her gender was never a consideration. “I didn’t think of it. I handled myself as an artist and none of that came into play at any of the meetings.”

Kamoinge was based in Harlem and Smith lived between there and Greenwich Village. “It wasn’t easy, it was a rough period. There were guys on the streets doing heroin, nodding out,” she says. “I used to have to wear a big baggy raincoat and a floppy hat. One time someone tried to take my camera.” I ask whether she ever baulked at confronting and cajoling subjects she photographed in the street, as Diane Arbus was known to do. “Oh, I still feel that way!” she exclaims.

Smith never met Arbus, but she was close to her then teacher, Lisette Model, who would compare the two photographers. “Lisette used to talk about ‘Dionne’, and I never realised until after she passed that she was talking about Diane Arbus,” Smith explains. “I had a lot in common with Diane. Her husband got involved with a younger student and she had issues [around] self-respect and not making money.” It is hard not to wonder how much white privilege played a part in the very different trajectories of the two artists.

At present, Smith still has no gallery representation, although that is likely to change. The Frieze Masters show has been put together by Jenkins Johnson gallery in San Francisco, which declined to disclose prices for Smith’s prints. Steven Kasher, who showed her work in 2017, recently closed his New York space and joined David Zwirner.

So what does Smith think about the attention she and other female artists of colour are receiving? “It’s a good thing,” she enthuses. “It’s not just having my photographs in Frieze Masters, it’s people who are supportive of black artists, who are having these conversations. It’s like, we can do this! We can change the world, we have a common cause!”

As we say our goodbyes, Smith remembers a lyric from Pharoah Sanders’s epic spiritual jazz track that has been playing on her mind: “The creator has a master plan, peace and happiness for every man”. It is a stark reminder of how far the art world has yet to go.