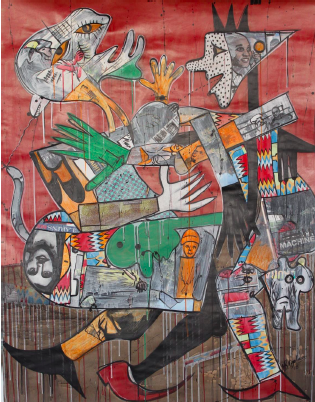 Was it luck, or destiny? Blessing Ngobeni could never have predicted his path to becoming a revered artist. Raised in an abusive household, Ngobeni ran away as a child and made it to Alexandra, where he joined the wrong crowd. At the age of 15, he was arrested for robbery and spent nearly six years in prison. It could have been rock bottom. Yet it was here that Ngobeni discovered his talents. Out of boredom, he started sketching fellow inmates’ portraits. Realising he could improve his capabilities and make a life for himself, Ngobeni began an astonishing journey to liberation. “Perhaps the universe wanted me to become an artist,” he says.

Upon leaving prison, Ngobeni pursued his art with fervour. While studying at the Artist Proof Studio and working for David Krut Publishers, Ngobeni gradually built up his repertoire and began exhibiting. His distinctive and provocative style caught people’s attention. Ngobeni launched onto the national scene when he received the Reinhold Cassirer Award in 2012. He’s since become one of the most respected artists in South Africa, critiquing politics with his multimedia pieces. Between paper cuttings and bursts of paint, surreal scenes play out on canvas. Ngobeni’s creations are a striking statement against injustice.

Although Ngobeni has exhibited in New York, London, and Venice, he’s pushing to grow local artistry. With the Blessing Ngobeni Art Prize, he offers rising talent residencies at spaces like Victoria Yards, and solo exhibitions with galleries such as Everard Read. Harnessing the power of the paintbrush, Ngobeni uplifts others and unleashes his thoughts. “Art freed me from imprisonment,” he says. “I encourage people to commit to things that make them feel free.” Whether fluke or fate led him to the canvas, this is exactly where Ngobeni belongs.