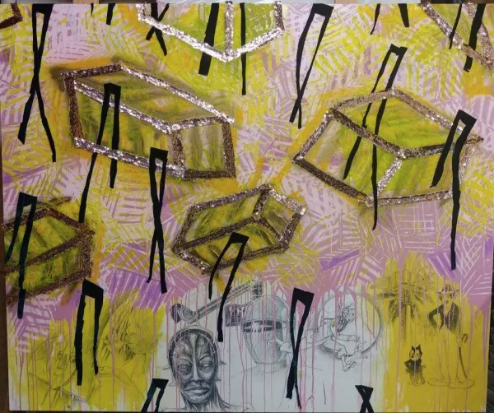 A key voice in the fight over the City’s most controversial mural, Crumpler reflects on his recent work and the instructive role of art in society.

Another exuberantly funky painting features a fringed and sequined form in midnight blue, adorned with an ornate oval mirror that Crumpler affixed to the canvas and inscribed “Noir Kitsch.” Off to the right, drawn in red Sharpie, are Betty Boop, musician George Clinton in his Dr. Funkenstein guise, and a cinema showing Superfly, the 1972 blaxploitation classic.

“They’re meant to be dense but open,” the artist says in a sonorous voice. A robust man with a gray goatee, smooth dome and red-framed specs, he’s sitting in the basement studio of his Berkeley Hills home on a hot summer morning, discussing ideas that engage his fertile mind and inform his improvisational paintings. Thelonious Monk’s music plays in the background as he riffs expansively on everything from container shipping and the effects of globalization (a subject he’s explored in metaphorical paintings and drawings for several years) to Western and Asian ideas of Enlightenment, black kitsch, shiny-object distraction, the French rococo painter Fragonard and the cosmic jazzman Sun Ra. “Everytime you go into the painting,” he explains,“you’re going to find something else. It’s going to reveal itself upon closer inspection.”

He points out a tiny, falling mauve figure in the Noir Kitsch painting, a nod to Matisse’s Black Icarus cutout. “As a maker, my interest is never to be explicit. My point is always to cue up, to put the elements together to suggest something for you to pay attention to. A painting has to beckon. But I never want my work to be so explicit that you get it as soon as you look at it. Even if I’m painting realistically, I want to evoke some kind of questioning, or confusion.”

At 70 years old, Crumpler, a professor at the San Francisco Art Institute, remains prolific and provocative. His work has been widely shown, collected and at the center of controversy. He grew up in the Bayview District, where he saw dockworkers displaced by containerization, and was a young student at the Art Institute in 1974 when he was commissioned to create a culturally inclusive mural at George Washington High School in response to Victor Arnautoff’s still-contentious mural, The Life of George Washington, back in the news 45 years later.

Arnautoff’s depiction of black slaves, and a slain Native American at Washington’s feet, had upset students who demanded that the three-panel WPA mural be removed and replaced with a new one painted by a black artist. Crumpler himself had been disturbed by the images when he first encountered the mural in the 1960s. He was never taught in history class that America’s first president and other founding fathers owned slaves. Unaware of this fact, it jarred him.

However, by the time he was tapped to paint what became his potent three-panel mural, entitled “Multi-Ethnic Heritage: Black, Asian, Native/Latin American,” he had studied art history and researched the imagery in The Life of George Washington only to realize what he saw as its subtle critique of whitewashed American history. He told Washington High students that, yes, he’d paint a new mural celebrating the cultures and contributions of Americans of many colors — but not if that meant damaging Arnautoff’s work.

“I said, ‘If you destroy a work of art, you destroy all art,’” recalls Crumpler, who traveled to Mexico to study the murals of masters such as Rivera, Orozco and Siqueiros (with whom he met) before starting his. “If you destroy Arnautoff’s art, you destroy the dialogue with my art. Those murals are linked. My work exists because of what happened as a result of his work.

Crumpler scoffs at the compromise recently struck by San Francisco Unified School District officials to cover up, but not paint over, the original mural. “Part of the problem with these people is they’re literalists,” he laments. “They haven’t been trained to see nuance and complication; they only read what is on the surface.” In an educational environment, he adds, “when an image makes you uncomfortable, that’s a teachable moment.”

Art, he explains, is meant to make you think and to appreciate complexity. “Art’s role is always to shake up human complacency, so that vision is what emerges from your sleep. That’s why art is akin to science, without the certainty.