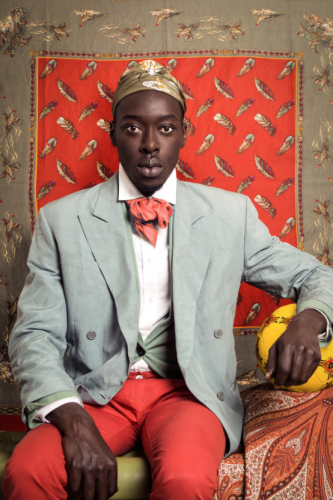 Ask a question about the African art market, and many experts will be quick to tell you that there is no such thing. How could one market possibly encompass 54 countries, 1.2 billion people, and countless aesthetic traditions?

It can’t. But that won’t stop the global art market from trying. The commercial sector has a way of co-opting talent into the international art slipstream (sometimes flattening history and context in the process). It has done so with artists—and entire movements—from Asia and Latin America in the past. Africa may be next in line.

The seeds are there: strong art schools, a growing number of high-net-worth individuals, and rapid urbanization. Researchers project that the continent will be home to at least nine cities of more than 10 million people by 2050. Meanwhile, museums in Europe and North America have hosted an unprecedented number of shows of African art in recent years, while art fairs dedicated to the field have sprung up worldwide, including 1-54 in New York, Marrakech, and London, where its seventh edition opens this week, and the newer Art X Lagos, which kicks off its fourth edition in Nigeria in November.

Today, Africa’s art market has plenty of room to grow. Fewer than 1,000 works were sold at auction on the continent in the first six months of 2019, according to the artnet Price Database. Unlike Asia, where Hong Kong has emerged as a hub for the trade, Africa lacks a preeminent art-market capital.

And while the continent’s local collector base is growing steadily—Sotheby’s fourth dedicated auction of Modern and contemporary African art in April was dominated by African buyers and generated a total of $3 million, above its presale high estimate of $2.7 million—it is still nascent compared with the US, China, and Europe.

What is missing? “You need an infrastructure,” says Hannah O’Leary, head of Modern and contemporary African art at Sotheby’s. “On the whole, there is a real lack of public support. We are seeing lots of raw talent, but we need more of a market structure in order to support their careers.”

Some ambitious institutions are already rising. Over the past two years, museums like Zeitz MOCAA in Cape Town, the Museum of African Contemporary Art Al Maaden in Marrakech, and the Museum of Black Civilizations in Dakar have launched with a mission to write their own contemporary art histories. Meanwhile, artists who have already found commercial success, such as Hassan Hajjaj and Ibrahim Mahama, have set up institutions of their own to nurture young talent at home.

A single hub for such a massive and heterogenous continent may never materialize. Instead, Rakeb Sile, cofounder of the gallery Addis Fine Art, predicts that “there will be and should be different hubs in several regions of Africa.”

We have assembled a guide to six of these dynamic emerging art capitals: Accra, Addis Ababa, Cape Town, Dakar, Lagos, and Marrakech. Each city has its own heritage, culture, and distinctive history with colonialism—resulting in unique artistic production.

Painting remains most popular in East Africa, which is home to the two oldest art schools on the continent, while West Africa has fostered more experimentation with large-scale installations and performance-based work. Both sides of the continent also have a rich tradition of photography.

Art is in Senegal’s DNA. Léopold Sédar Senghor, the country’s first president after achieving independence in 1960, invested as much as 25 percent of the state’s budget in its culture ministry.

Creativity flourished under his presidency during a period between 1960 and 1980 known as l’École de Dakar, which was characterized by state patronage. Dakar’s art scene is also known for Laboratoire Agit’Art, a satirical and avant-garde art collective founded in Dakar in 1973 by writer and performer Youssouf John.

Today, Senegal is among Africa’s most stable countries, having experienced three peaceful political transitions since 1960. Since 2014, discoveries of large oil and gas deposits in Senegal have opened the country to energetic international speculation. The World Bank predicts Senegal’s economy will grow more than 6 percent annually over the coming years.

What to Know: Diop’s photographs of prominent figures from Senegal’s cultural scene honor the long tradition of African studio photography.

Most Wanted: The “Diaspora” series (2014), which pays tribute to significant Africans from the 16th to the 19th centuries, and the “Liberty” series (2016), which reflects the history of Black protest movements.

Up Next: His work will be included in the Fotofest Biennial in Houston next spring.