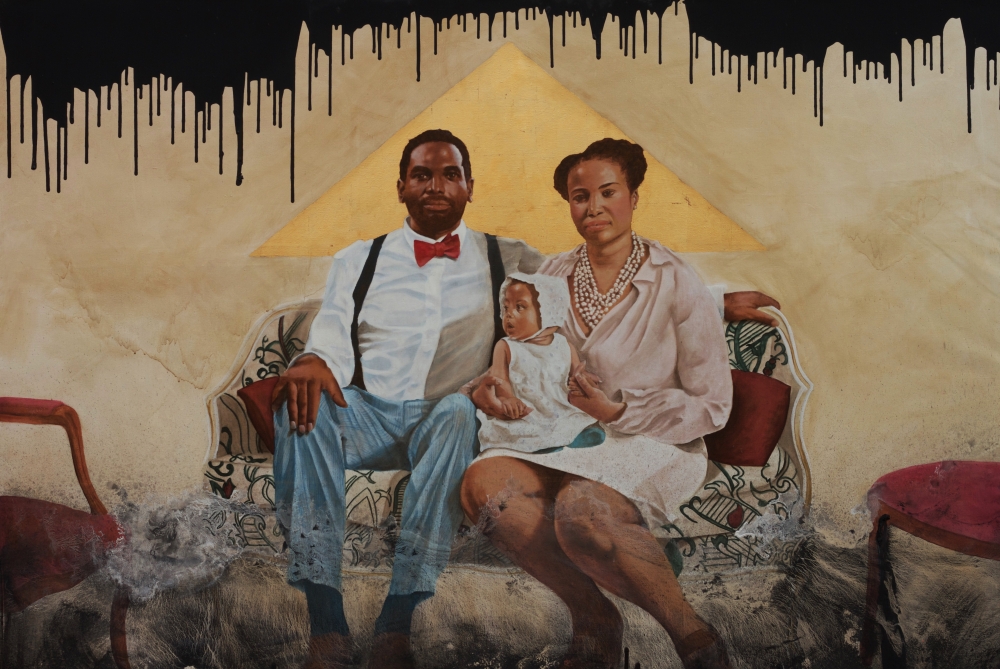 NEARLY A CENTURY AGO, the Greenwood section of Tulsa, Okla., was destroyed. The thriving black business district known as Black Wall Street was besieged in 1921, from May 31 to June 1, by a white mob attacking residents and their homes and businesses. The massacre leveled 35 square blocks, killing countless people (reports range from 39 to 300) and leaving thousands homeless. Schools, theaters, a church, a library, doctor’s offices, law offices, shops, and restaurants were left in ruins.

An ongoing series of formal portraits by Ajamu Kojo‘s immortalizes the citizens of Greenwood. He envisions the individuals and families, entrepreneurs and professionals who formed the fabric of the African American community. He’s documented Sean and Lucy Mackey, progressives who worked in real estate, for example, and Mary Elizabeth Jones Parrish, an author who published an eyewitness account of the massacre in 1923.

The portraits are on view in “Black Wall Street: The Case for Reparations” at Jenkins Johnson Gallery in Brooklyn. Kojo is presenting seven works borne of rigorous research, a collapsing of time and disciplines.

Born in Little Rock, Ark., Kojo lives and works in Brooklyn. To make the paintings, he cast people who knew from his neighborhood—artists, lawyers, and entrepreneurs—and immersed his sitters in period environments. He designed the sets, selected the furniture, and chose the costumes. A scenic artist who works in film and television while maintaining a formal painting practice, he draws on his myriad experience and also connects the contemporary moment to one of the most violent racial incidents in U.S. history. The project is about uplifting memories, shared histories, and how reflections of the past echo in the present.

For generations, the 1921 massacre was largely forgotten. Kojo first heard about it at Howard University, where he studied film and television production and theater arts. Years later, he learned more in a 2016 video, a first-hand account from Olivia Hooker (1915-2018). A professor of psychology, she was one of the first black women to join the U.S. Coast Guard and one of the last living residents of Greenwood.

Hooker was a member of the Tulsa Race Riot Commission. Established by the state of Oklahoma in 1997, the commission issued a report in 2001. A section detailed state and city culpability and called for reparations. The U.S. House of Representatives later described the report as “detailing for the first time the extent of the city and State government’s involvement in the riot and in the cover-up that followed and the total lack of remedy available in the courts at that time.”

The few survivors that remained when the report was issued and their many descendants have yet to see any reparations. More recently, mainstream awareness of the Tulsa Massacre has been triggered by the integration of the history in the foundational storyline of “Watchmen,” the HBO series starring Regina King. In addition, the incident is being incorporated in school curriculums. News accounts are increasing, tourism in Tulsa is up, and Black Wall Street 1921, a new podcast, was recently launched in anticipation of the 100-year anniversary of the massacre in 2021. While awareness of the massacre has grown, meaningful acknowledgement of its profound legacy of destruction is harder to come by.

Kojo is continuing his series of reimagined portraits and plans to identify new sitters soon for upcoming works. The paintings transport his friends, neighbors, and acquaintances to the early 20th century with soft, layered details that evidence elaborate interiors and also age the images and add characteristics of ruin. In stark contrast, opaque black paint drips down from the top of each canvas.

The exhibition description explains the meaning of this particular detail: “This is a nod to the crude oil that was a source of much of the capital that was the bedrock of the [Greenwood] community’s success. It is also a representation of the ominous events to come.” CT