Jenkins Johnson Gallery, San Francisco, is proud to present its first solo show by interdisciplinary artist Sadie Barnette (b. 1984, Oakland, CA). FROM HERE will feature drawings, collage, photography, and found objects, creating a dynamic installation exploring the abstraction of urban space and the transcendence of the mundane to the imaginative.  There will be a reception for the artist on Saturday, September 17, from 2:00 to 4:00 pm, in conjunction with the Union Square Art Walk. The exhibit runs from September 15 through October 29, 2016. Barnette will be featured in the exhibition All Power to the People: Black Panthers at 50 at the Oakland Museum, running concurrently from October 8, 2016 to February 12, 2017. Sadie Barnette will also be featured in a solo show at the Untitled art fair in Miami Beach, November 30 to December 4, 2016.

Sadie Barnette writes, “I am the Oakland 80’s baby of the radical and armed movement of love, the interracial, outer-spatial, and of disco idealism. I am the improbable celebration of my parents’ acts of resistance, gender defiant grace, fierce Midwestern kindness, dearly protected optimism and humor.” As the world commemorates the 50th anniversary of the founding of the Black Panther Party, FROM HERE includes works drawing on a 500-page FBI surveillance file on her father, Rodney Barnette, who was a founder of the Compton, California, chapter of The Black Panther Party, a member of the National United Committee to Free Angela Davis, and opened the first black-owned gay bar in San Francisco. A print of a 1971 typewritten letter from the artist’s father details his then current work fighting for the freedom of Angela Davis; in an earnest yet wise voice he describes the protests and courtroom scene but ends the letter with details of a family party, reminding us that this political history is also dearly personal.

A text piece, intricately drawn in graphite, of the word “Compland” suggests an imagined cultural space, though geographically impossible, blending the cities of Compton and Oakland. These two cities hold equal parts biographical significance for the artist and importance as iconic places defining west coast culture, from Black Power to hip hop. The idea of this intangible space allows the title FROM HERE to be both literal and expansive. Family photographs and ephemera punctuate Barnette’s imagined space with evidence of the real. California 1970’s living rooms, stacks of money and coins, sidewalk cracks and fences, stucco buildings and 1980's cars are viewed alongside splashes of gems and holographic iridescence. Constellations of works on paper introduce small pops of neon color, a slight buzz of glitter, and in contrast to the controlled application of graphite, wild yet elegant spray paint gestures.

Barnette’s work deals in the currency of magical realism, The Everyday, and transcendence. Whether working in photography, drawing, collage, book-making, or large-scale installations, she creates visual compositions that engage a hybrid aesthetic of minimalism and density, using text, glitter, and found objects to demonstrate the necessity for poetry and abstraction in urban life and the power of the personal as political. 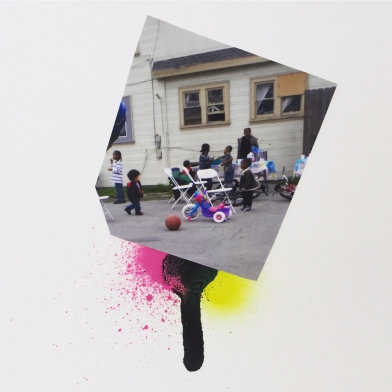 There has been a reshuffling of the deck as far as Bay Area galleries are concerned, especially in the city, where quite a few have moved from downtown and created art hubs in less centralized, more affordable locations, not to mention a proliferation of new galleries in Oakland as well as San Francisco. Too much to do justice to in this brief space, but, in microcosm, here's what's happening this fall.