Jenkins Johnson Projects, New York, is pleased to present A Promised Land, the first New York solo exhibition of South African artist Mohau Modisakeng. This exhibition marks the New York debut of the artist’s ZION video installation, an outgrowth of his landmark site-specific processional performance of the same name commissioned for the 2017 Performa Biennial. The ZION video activates sites resonant to the long history of Black settlements in New York City, including Seneca Village, a 19th century Black community eradicated to make way for the development of Central Park. Among the works featured in the exhibition are several large-scale photographs that harness and transmute the emotion of what it means to be dispersed and displaced. Also included in the show are selections from Modisakeng’s Passage, which debuted at the South Africa pavilion at the 2017 Venice Biennale. Modisakeng’s work engages themes of race, forced migration, the deep divides of post-apartheid South Africa, the post-colonial African continent, and the Global Black Diaspora as a whole.

In Modisakeng’s ZION, the artist deals with the relationship between body, place and the global history of displacement of Black communities. There is an idea that all people are meant to belong somewhere, yet in reality there are millions of people who are unsettled, in search of refuge, migrating across borders and landscapes for various reasons. In this work, there is no obvious signifier of place except for a heap of coal being thrown on a table, onto the floor and over the body. The black rocks of fossilised material represents the abundant natural mineral wealth deposited beneath the ground. While coal is a valuable source of energy across the world, sustaining modern economies and industries, the more valued minerals such as oil, gold, copper and diamonds, which are found in abundance on the African continent. These natural resources have long bred conflict and cruelty that have caused African descended people all over the globe to be forced to flee from their homes. The coal in this series refers not only to the mineral wealth attached to the land, but to the displacement that happens as people are subjected to the violence that follows the exploitation of these types of resources. ZION seeks to mark these absences and the conflicts that have caused the forced migration of millions of African people within the African context, casting them into a life of refuge.

A Promised Land also features photographic selections from Passage (2017), commissioned by the South African Department of Arts and Culture on the occasion of the 57th International Art Exhibition – La Biennale di Venezia. The project is a meditation on slavery’s dismemberment of African identity and its enduring erasure of personal histories. In the work, we are confronted with three characters – a woman with a hawk perched on her arm, a young man in a Trilby hat and a woman wrapped in a Basotho blanket. The arched shape of the boat frames each passenger with their heads pointed towards the prow of the boat, they are each traveling with a single possession. As the passengers lie motionless on their backs looking up at the sky, they begin to perform a series of actions that move between gestures of struggle and resignation. A pool of water slowly forms beneath their bodies. The rising water gradually floods the well of the boat leaving the passengers submerged while the boat slowly sinks and disappears.

In Passage, the ebb and flow of water is both life-giving and deadly, symbolizes the many who have arrived or departed from South Africa in trade, as cargo or as transient bodies belonging to no particular state. In South Africa, systems of indentured labor and slavery were instituted by the Cape Colony in 1652 to meet the growing demand for labor. Dutch settlers imported people from the Indian subcontinent, Indonesia, Madagascar, East Africa and Angola, putting them to work on plantations and at ports. South Africa became a jostling ground between the Dutch and British, its native people rendered as mere commodities moving through the establishment of an industrialized mining economy, as laborers and as soldiers in the Anglo Boer and other global conflicts. In Setswana, the experience of life is referred to as a ‘passage’. The Setswana word for life, botshelo, means ‘to cross over’. As such, all human beings are referred to as bafeti (‘voyagers’), a word that points to the fact that the experience of life is transient; it has a beginning and an end, as with any voyage.

Mohau Modisakeng was born in Soweto in 1986 and lives and works between Johannesburg and Cape Town. His work engages race, the militarization of society and the deep divides of post-apartheid South Africa and the post-colonial continent. He interrogates the collective narratives that inform our experience of the world, in particular those that evoke the black body as a site of fragmentation and distortion.

For more information on this exhibition please contact Curatorial Director, Niama Safia Sandy at 212.629.0707 or nyc@jenkinsjohnsongallery.com 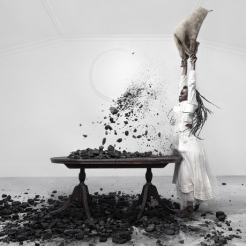