Enrico Riley in Conversation with

Jenkins Johnson Projects is pleased to present Enrico Riley’s solo exhibition, New World. The paintings are part of an unfolding and evolving cycle that investigates themes of historical and contemporary violence, martyrdom, grief, and the middle passage within a spatial domain.

Enrico Riley challenges viewers to decipher and contextualize his work’s fractured narratives. For many Americans, exposure to the plethora of recent media examples of reflexive violence perpetrated on African-Americans has blurred the boundaries between the historical record with which our country is so familiar and the problems still facing contemporary culture today. From this epicenter of misfortune and violence, Riley is using the medium of painting as a method for remembering and reflecting upon grief, but also as a means to investigate the linkages between the old world and new, to not just recycle the old stories, but also to seek paths for forging new narratives.

Each painting in the series is a suggestion of an event. We are given fragments of a hole and are left to determine the rest. In this way, Riley provides a platform for participation. He invites the audience to complete those missing elements without promising resolution. We are left to contemplate not only the story, but its fragmentation, and perhaps how the two coexist.

Riley uses disjointed and out of sequence imagery that can act as symbols or trigger parts of the story or foreshadow those yet to come. Often, he is mixing different time points into a single frame. These time differences can span the course of a few hours, perhaps a day, or they can span decades, alluding to a past we all recall. Allowing for an ambiguous or changing time frame opens the narrative up to more possible contexts. Objects hold significant weight in Riley’s paintings, often taking on the narrative themselves. They become bodily or a stand-in for a person or action. At the same time, another strong reading of these interacting objects is purely in terms of color, light, and shape.

Riley draws from the motifs, formal techniques, and narrative conventions of late medieval Italian painting. For instance, when considering color, he simulates the Renaissance painting technique of atmospheric perspective. This technique signals distance in both time and space, allowing for narrative expansion. Similarly, he applies the Judeo-Christian visual convention from that time period of using visual forms iconically, so that objects or methods used to kill a saint are transfigured to symbolize the saint himself, thus imbuing it with deeper meaning.

Additionally, Riley’s exploration of subject and execution of form references Philip Guston’s “hood” paintings of the late 1960’s, in which Guston reflected on the Vietnam War and the vitriol of the Ku Klux Klan with exaggerated gestural forms. Similarly, Riley’s use of disjointed composition, such as the cropping of his subjects, echoes Édouard Manet’s own use of anti-narrative measures. The predominance of a blue palette with aerial perspective together with the corporeal forms can create in the spectator a disorienting physical effect that evokes that of the anonymous subject inside the fragmented narrative.

By contraposing images of normalcy with violence, and conflating time past and present, conflating European and African-American references, conflating sorrow for the past and imagined alternatives, by eschewing a linear narrative and continuing to align with abstraction, Riley’s paintings expose the content as universal and read as a glimpse into multiple futures.

Enrico Riley is currently a Professor of Studio Art at Dartmouth College in Hanover, NH and Chair of Studio Art. He is the recipient of a John Simon Guggenheim Memorial Foundation Fellowship, a Rome Prize in Visual Arts, an American Academy of Arts and Letters Purchase Prize in Painting, and a Phillip Morris Fellowship. His works have been exhibited at institutions including the Virginia Museum of Fine Arts, Richmond, VA; the Columbus Museum of Art, Columbus, GA; The Nasher Sculpture Center, Dallas, TX; the Hood Museum of Art, Hanover, NH; The Painting Center, New York; and the Museum for the National Center of Afro-American Artists, Roxbury, MA.  His solo exhibitions include The American Academy in Rome, Itlay; SACI College of Art & Design, Florence, Italy; and Hampshire College, Amherst, MA. He has a MFA in painting from the Yale School of Art and a BA in Visual Studies from Dartmouth College. 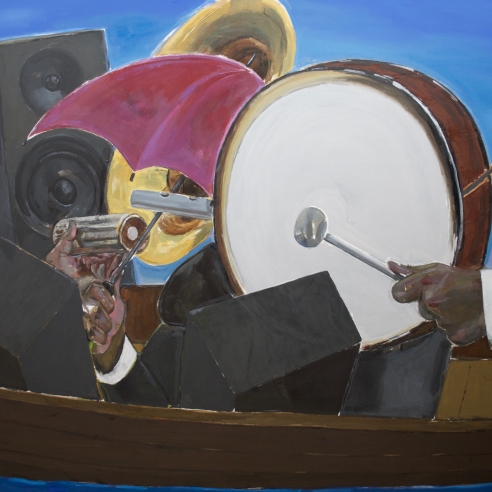 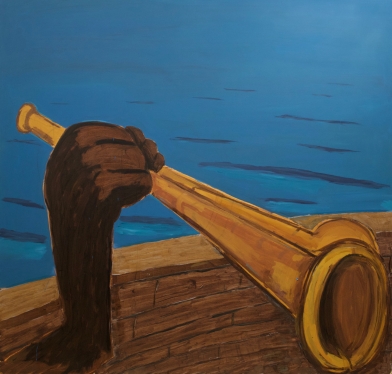 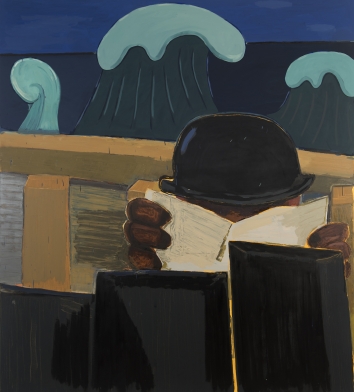 Part of Mr. Riley’s strategy is to keep you guessing, allowing the paintings to be open-ended enough that you will stand before them looking, pondering and occasionally grimacing. 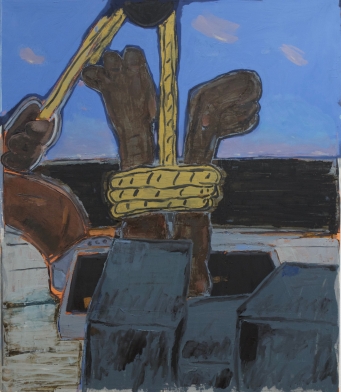 Over the course of his career Enrico Riley has crossed widely divergent modes of art-making, moving (broadly) from a sort of cerebral minimalism to a more frenetic, gestural, and high-keyed manner of expressionism. Within the last few years he has shifted directions once more, toward narrative works that engage with race and social concerns—prompted, he has said, by the proliferation of news stories about police brutality and violence against African-Americans 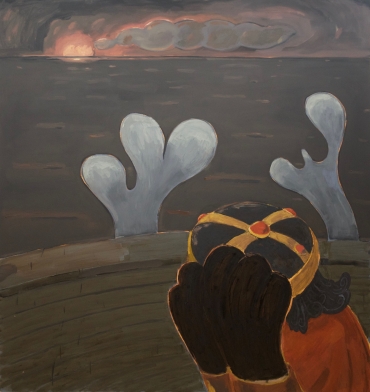 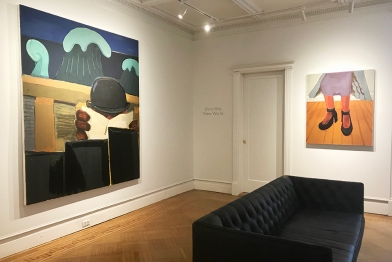 NEW YORK, NY.- Jenkins Johnson Projects is presenting Enrico Riley’s solo exhibition, New World. The paintings are part of an unfolding and evolving cycle that investigates themes of historical and contemporary violence, martyrdom, grief, and the middle passage within a spatial domain.