Jenkins Johnson Gallery, San Francisco is pleased to present new works by acclaimed British artist Annie Kevans in her first solo exhibition on the West Coast, which runs from October 2 through December 20, 2014. The exhibition will feature new paintings from her recent series Women and the History of Art, comprised of reimagined portraits of female artists who have largely been forgotten by modern audiences. Kevans, a rising art star, was named in Harper's Bazaar's “Forty Under 40” and New Woman's “Brit Hit List,” which described Kevans as the "new Tracey Emin". Concurrent with her solo show at Jenkins Johnson is a traveling exhibition of her series The Muses of Jean Paul Gaultier, a body of work featuring the designer's muses, and which Gaultier himself refers to as “fresh and contemporary”. The Fashion World of Jean Paul Gaultier is currently on view at Barbican in London before traveling to the National Galleries in Melbourne and Paris. Also this fall, Kevans’ work will be part of a 4-person exhibition at Marres Center for Contemporary Culture in Maastricht.

Kevans explores the relationship between power and identity through portraiture. Women and the History of Art asks why successful female artists are unknown, while also celebrating these forgotten masters by re-introducing them onto the walls of galleries and museums. Building on the success of this ongoing series, which primarily began with portraits of European artists from as early as the 16th century, the new works in the exhibition take on a broader and more American scope. In addition to European artists, Kevans plans to include forgotten Pop artists of the 1960s, black female artists such as Alma Thomas, whose work is in the White House, and those who reached the spotlight by standing on the shoulders of their female predecessors but whose success―such as in the case of Frida Kahlo and Georgia O’Keefe—is sometimes attributed to their artist husbands.

Kevans paints elegantly constructed composite portraits from existing images, research, imagination, and in some cases, the artists’ self-portraits. Focusing on historical figures, often the marginalized, overlooked, or objectified, Kevans brings to light and challenges society’s perception of individuals and groups we may or may not remember. Whether child stars, dictators, or the insane, Kevans captures a piercing insight and imbues her subjects with a tangible humanity and sensuality. She believes that a person’s identity is not preset but is a shifting temporary construction, and her work questions our verdicts on history and perceptions of intellectual solidity.

Women and the History of Art directly relates to Kevans as a successful female artist herself in what is still a male-dominated art world (in fact, only 5% of London galleries show an equal number of male and female artists). Believing women couldn’t be professional artists until the 20th century, Kevans began looking for her own artistic role models and was surprised to discover a great number of important female artists who flourished and were celebrated during their lifetimes. As someone who describes herself as a “natural feminist”, Kevans was impassioned to uncover these successful but largely forgotten artists. An additional catalyst was her irritation upon being asked whether she would go back to the studio after the birth of her child—something that would not be asked of a male artist. After extensive research, Kevans found inspiration in artist mothers, like the 16th century Italian Lavinia Fontana, who had 11 children and was regarded as the first woman artist to work on a par with her male peers, painting altarpieces and papal portraits.

Kevans choses to paint artists “who were as successful, and in some cases, more so, than their male counterparts,” but were left out of the art historical canon and only recognized in the secondary realm of feminist art history. "Critics just didn't take women seriously," says Kevans. For example, art historian H.W. Janson, who admired the work of Idelle Weber, a female Pop artist whose work was purchased by the Museum of Modern Art in New York when she was only 25 years old, told Weber that he did not include women painters in his books. Weber is one of the many female Pop artists of the 1960s who were turned away by New York galleries, which largely did not accept female artists. Kevans’ portraits include Pop artists such as Rosalyn Drexler, Idelle Weber, and Jann Haworth, who were swept aside in favor of white male Pop artists.

Some female artists faced additional adversity due to their race. A fascinating example is African American artist Edmonia Lewis (c. 1843 – c. 1911) who, after a turbulent childhood, made her name as a sculptor, often portraying abolitionists and Civil Rights heroes. Lewis attended Oberlin College, where she was attacked by the townspeople who believed she poisoned her white roommates. She was put on trial and acquitted, yet the school treated her with suspicion and eventually prevented her from graduating. Despite these hardships, her skills as a sculptor shined. Lewis sold enough artwork to travel to Europe at age 22 where she found relief, having felt that the United States “had no room for a colored sculptor.” Lewis was promoted as self-taught, “naïf and exotic” to those who flocked to the studio to see the “marvelous untaught maiden”. As she gained success, Lewis needed to prove her talent by carving marble in front of visitors who thought she was a hoax.  In 2002, the scholar Molefi Kete Asante listed Edmonia Lewis on his list of 100 Greatest African Americans.

In addition to not being written about and exhibited, or marginalized for the color of their skin, Kevans has found that women artists’ successes were often attributed to men. "Because a lot of women were married to other artists, people assumed they were helped by their husbands,” says Kevans. “But, actually, those women were artists before they were married; indeed, that's how they met their husbands." Suzanne Valadon (1865–1938) is more famous for her personal relationships with Renoir, Erik Saite, and Degas, despite being the first woman painter admitted to the Société Nationale des Beaux Arts. Realizing that she, too, could be erased from our collective cultural history, Kevans memorializes female artists whose achievement is beyond dispute. Her exquisite portraits repopulate the male-dominated artistic landscape, literally and figuratively giving faces and names to those who were scrubbed out of the history books and ultimately forgotten.

Kevans’ first series, Boys, which depicts the young faces some of the world's worst dictators, was bought in its entirety by Charles Saatchi directly from Kevans' Central St. Martins School of Art & Design degree show in 2004 and put on public display at the Saatchi Gallery as part of his 2013 exhibition, Paper. The series was described as “the highlight” of the exhibition by The Globe and Mail. Since then, Kevans has had solo exhibitions in New York, London, and Vienna. Her work has been featured in numerous group exhibitions in the UK, Germany, Austria, Italy, and the US.  She was a finalist in the Women of the Future awards and a finalist in the Jerwood Drawing Prize. Her work can be found in major collections, including the Pallant House Gallery, the David Roberts Collection, 21c Museum, the Saatchi Collection, and the collections of Lord Rothermere, Stephen Fry, Marc Quinn, Adam Sender, and Jean Pigozzi, among others. She lives and works in London and is currently in negotiations with leading publishing houses for a monograph of her work from the last ten years. 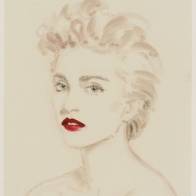 British artist Annie Kevans has been commissioned by exhibition curator Thierry-Maxime Loriot to create a series of works for the exhibition La Planète Mode de Jean Paul Gaultier.  The exhibition originated at the Barbican Gallery in London and is currently at the National Gallery of Victoria in Melbourne. The show has received critical acclaim, and opens at the famous Grande Palais on April 1