The Tulsa Massacre is often cited as the single most violent race-related incident in United States history. For nearly a century, the history of the incident wherein over 800 people in the community were killed or injured by a mob of white supremacists has been obscured. In 2016, the artist stumbled upon a video of Dr. Olivia Hooker, the last surviving resident of the Greenwood community. After listening to Dr. Hooker speak, Kojo dove into to extensive research and exploration of the history of the massacre, and envisioned a path to immortalizing the people of Greenwood through his art. He selected members of his Brooklyn community – artists, lawyers, entrepreneurs – who to him represented reimaginings of the people who made Black Wall Street what it was. This choice also collapses the perceived distance in time and space between the community in 1920s Tulsa and in Brooklyn of the present day. This is about our shared history but it is also a reminder of our very urgent present

Kojo used his background in film and theater to build and design sets and wardrobes that called back to the heyday of Black Wall Street. Each portrait features a black tar-like drip in the outer edges of the panel. This is a nod to the crude oil that was a source of much of the capital that was the bedrock of the community’s success. It is also a representation of the ominous events to come.

Ajamu Kojo is a figurative painter and filmmaker living and working in Brooklyn.

He splits his time between developing independent film projects, working as a scenic artist on television and film productions and concentrating on his fine art works. In addition to working on such projects as Law & Order, Boardwalk Empire, Vinyl and BULL, he is continuously developing works which take on a critical view of social, political and cultural issues through story, slices of life and moments of voyeurism

Kojo is a native of Little Rock, Arkansas. He attended Howard University where he majored in Film and Television Production and minored in Theatre Arts. 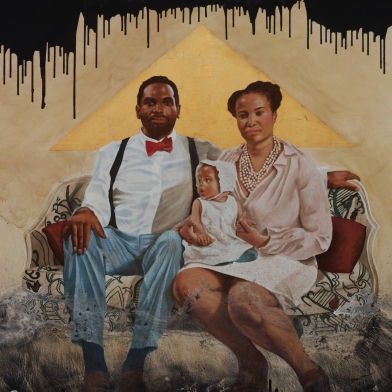 In a Series of Dignified Portraits, Ajamu Kojo Recalls the Racial Violence that Destroyed ‘Black Wall Street’ Nearly 100 Years Ago

NEARLY A CENTURY AGO, the Greenwood section of Tulsa, Okla., was destroyed. The thriving black business district known as Black Wall Street was besieged in 1921, from May 31 to June 1, by a white mob attacking residents and their homes and businesses.