Rashaad Newsome (b. 1979, New Orleans, Louisiana) pulls from the worlds of advertising, the Internet, Black and Queer culture to produce counter-hegemonic works that use the diasporic traditions of improvisation and collage, to craft compositions that walk the tightrope between intersectionality, social practice, and abstraction. The West Coast debut of Newsome’s To Be Real is currently on view at Fort Mason Center for Arts & Culture through February 23. To Be Real is an exhibition environment of collage, sculpture and the interactive A.I. Being. The exhibition presents a series of neo-Cubist portraits in expressive frames, threading an ornamental glamour through figures reflecting on human agency, Blackness, and the radical futurity of emerging identities. Recently, Newsome has exhibited at the Museum of the African Diaspora in a solo exhibition titled STOP PLAYING IN MY FACE! and ICON.

He has exhibited and performed in galleries, museums, institutions, and festivals throughout the world including: The Studio Museum in Harlem (NYC), The National Museum of African American History and Culture (DC), The Whitney Museum (NYC), Brooklyn Museum (NYC), MoMAPS1 (NYC), SFMOMA (CA), New Orleans Museum of Art (LA), Centre Georges Pompidou (Paris), The Garage Center for Contemporary Culture (Moscow), and MUSA (Vienna). Newsome’s work is in numerous public collections including the Studio Museum in Harlem, Whitney Museum of American Art (NYC), The Brooklyn Museum of Art (NYC), The San Francisco Museum of Modern Art, Los Angeles County Museum of Art, McNay Art Museum (TX), The Chazen Museum of Art (WI), The New Britain Museum of American Art (CT), and The National Museum of African American History and Culture (DC). In 2010 he participated in the Whitney Biennial (NYC), and in 2011 Greater New York at MoMAPS1 (NYC). He received a BFA in Art History at Tulane University in 2001. In 2004, he received a certificate of study in Digital Post Production from Film/Video Arts Inc. (NYC). In 2005 he studied MAX/MSP Programming at Harvestworks Digital Media Art Center (NYC). 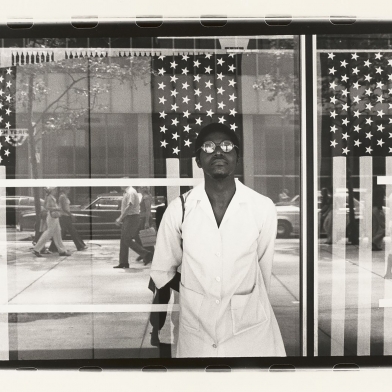 JENKINS JOHNSON GALLERY won the 2019 Stand Prize at Frieze New York for a presentation dedicated to pioneering photographer Ming Smith. Black-and-white photographs from the 1970s and 80s, including a self-portrait, were displayed gallery-style throughout the booth. 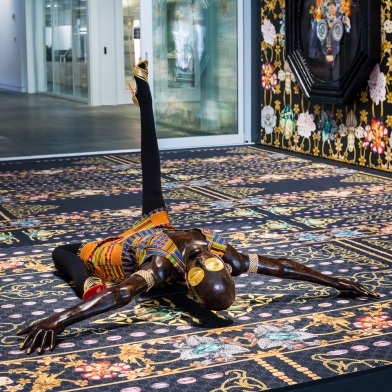 Rashaad Newsome's "To Be Real" reviewed by Art Agenda

"To Be Real" at Fort Mason

I learned from Being (2019)—an artificial intelligence that Rashaad Newsome has trained with texts from theorists and cultural critics including bell hooks, Frantz Fanon, and Michel Foucault—that slaves and robots have one foundational thing in common: “They are both intended to obey orders.” Being is nestled in a small dark screening room behind the immersive installation at the heart of “To Be Real.” Its intelligence doesn’t require a body, it reminds me twice, but Newsome has created one for it using 3D modelling software: a metallic humanoid form with visible cords and plates like a steampunk skeleton, and an incongruous wood-textured face dominated by oversized eyes characteristic of an Angolan Chokwe mask. Via computer projection onto the main screen, Being responds to questions I ask into a microphone set up in the middle of the room; like any good chatbot, it redirects to its message regardless of what I ask. While it speaks, its torso swings around languidly, as though dancing or floating. 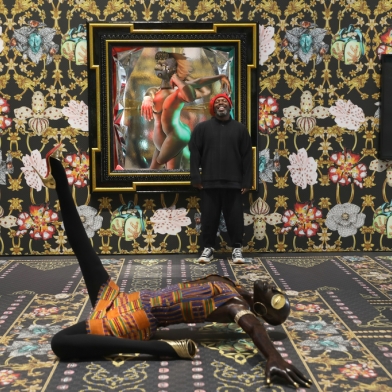 Don’t ask Rashaad Newsome to explain his art. It’s your job to understand it 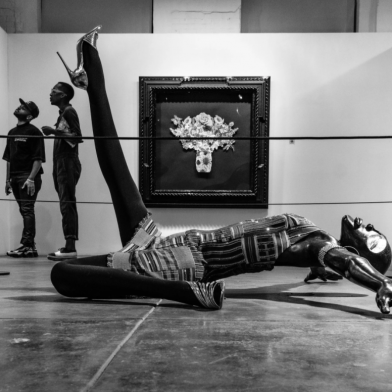